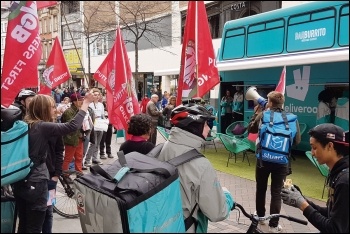 Deliveroo is spending a fortune handing out free food and vouchers to promote itself. This is an insult when the bosses refuse to deal with the riders' poor pay and conditions.

Greg Howard is the branch chair of the Nottingham Riders' Network, part of the IWGB trade union. He told the Socialist that they were there to make sure their demands were heard.

These demands include a fixed-distance rate of £1 a mile, and paid restaurant waiting time of £10 an hour. A transparent disciplinary procedure is also needed, rather than staff being laid off without valid reason.