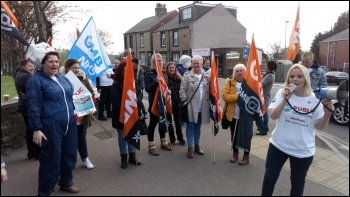 When catering services at Doncaster and Bassetlaw Hospitals NHS Trust were privatised and taken over by the French based multinational corporation Sodexo, staff were promised, as part of the legal transfer agreement, that they would keep their NHS 'Agenda for Change' terms and conditions.

However, when Sodexo refused to match the latest NHS pay rise, anger soon turned into defiance and the demand for strike action was raised. In a spectacular show of strength, 100% of the staff who took part in the ballot that followed voted to strike.

This was on a turnout of 89.4%, showing that the Tories' punitive anti-trade union laws need not be an insurmountable barrier to workers fighting back when a determined campaign is waged.

With the strike set for 1 May, staff are determined to see things through to the bitter end. Doncaster Trade Union Council has declared its support for the strike and socialist singer-songwriter Joe Solo has written a strike song called 'Sarnies for Solidarity'.

On 17 April, 50 ISS privatised Catering staff at Barnsley hospital, members of GMB union, protested against an imposed change from weekly to a fortnightly pay cycle plus an extra week in hand. This means three weeks without any wages, unless staff take a bridging loan - which then means wage cuts for two months. GMB is currently balloting members for industrial action and a further national day of protest action is planned for 26 April.