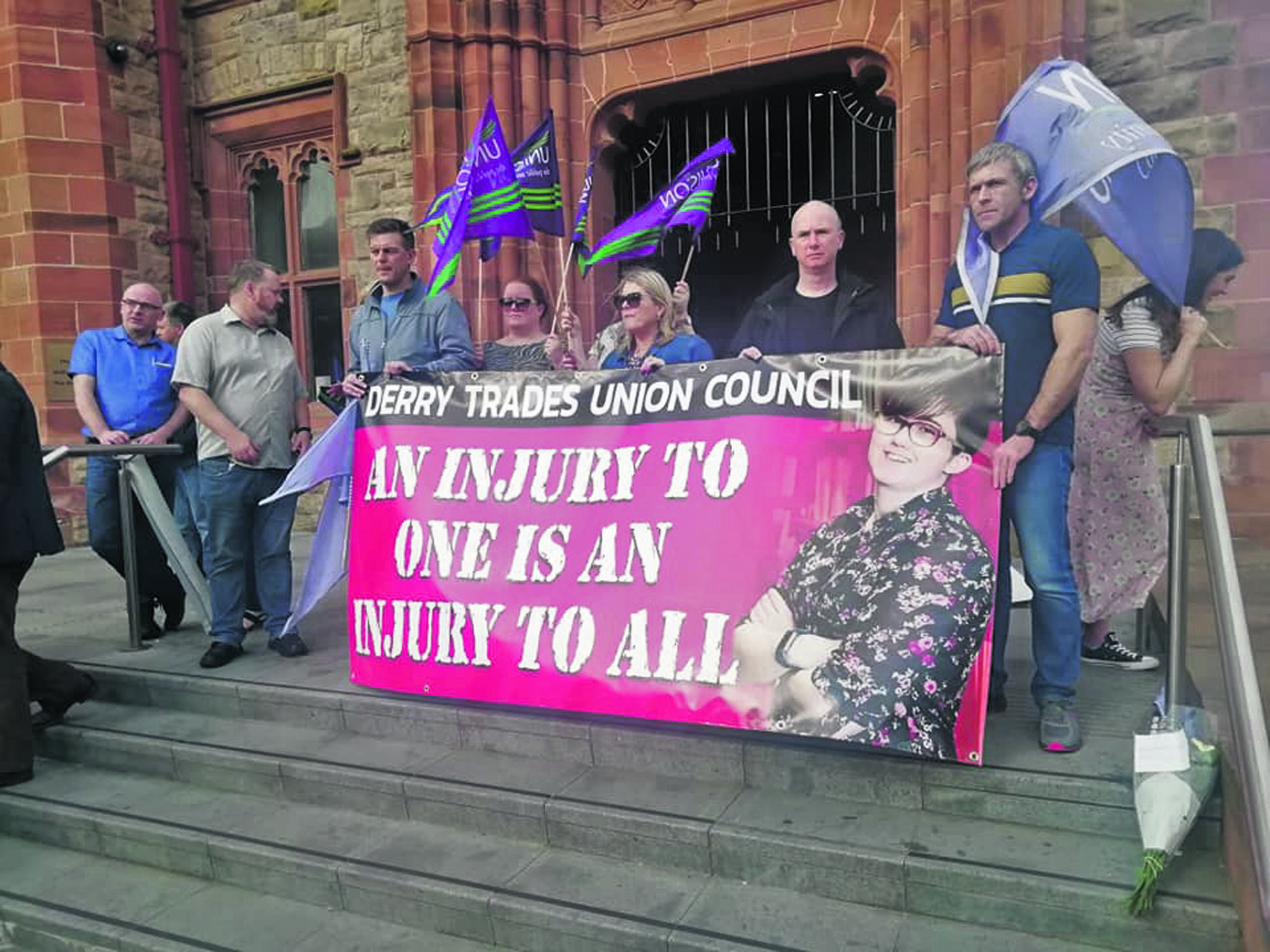 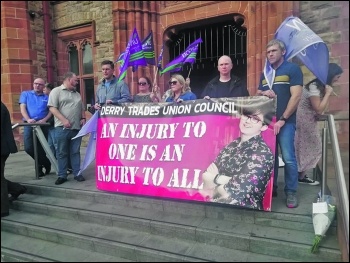 The killing of Lyra McKee has sent a wave of shock across the North. Lyra was only 29, but had already made a name for herself as a journalist, an author and an activist. Over 3,600 have died in the conflict, but some killings strike a particular chord.

Lyra’s young age means she is of the generation which has only known the “peace” delivered by the Good Friday Agreement, signed almost exactly 21 years before the day of her 18 April death. Her activism means that for many young people she represents hope for a better future. Among trade union activists in particular, there is intense anger that Lyra was a journalist doing her job when she died.

The senseless nature of her killing has brought immense pressure onto the New IRA and the political party it is linked to, Saoradh. Saoradh is clearly under pressure, and called off its Easter Monday parade in Derry.

Despite this, most working people will have an understandable fatalism at this point – they are prepared to support protests, but do not believe that dissident groups will listen. However, the lessons from the past are that mass, united action by the working class, Protestant and Catholic, does work.

In May 1972, the Official IRA shot dead Ranger William Best, a British soldier from Creggan home on a few days’ leave. A crowd of 1,500 women protested in the area the next day, and one week later the Officials called a ceasefire which marked the effective end of their armed campaign.

In 1998, a wave of protests across Ireland forced the Real IRA to call a ceasefire after the Omagh bomb.

Those who killed Lyra are also part of the generation who have grown up since the Good Friday Agreement. They were on the streets carrying guns because the Agreement has not brought the promised “peace dividend.”

Derry is the most deprived city in not just Northern Ireland, but the UK. These conditions have driven some young people in areas like Creggan into the ranks of paramilitaries.

The trade union movement unites 250,000 Catholic and Protestant workers, and is the only body which can now provide the lead required. A mass, trade union-led campaign must oppose both the repression and the dire social conditions which drive young people into armed groups.

This can check the growth of paramilitarism, ensure a new generation do not waste their lives in prison cells, and bring an end to the wasteful and senseless murder of young people like Lyra McKee.

The trade unions should now act and organise Northern Ireland-wide mass protests, demanding the New IRA and every other paramilitary not just end their armed campaigns, but disband immediately. Similar workers’ action in the past led, in effect, to half-day general strikes.

But this is not enough: the sectarian political parties which lined up to condemn the killing are part of the problem, not the solution. The unions must challenge sectarian politics and politicians, and state repression, and start to build a united political voice for all working-class and young people.

And ultimately, the only way to guarantee these changes, to end poverty and dead-end jobs, and to overcome the sectarianism which blights the lives of working-class people, is through a united struggle for a socialist future, where the economy is democratically planned to provide for all, not enrich the capitalist elite.

Trade unionists respond to the killing

The killing of my friend and fellow union member Lyra McKee on Thursday 18 April, while out working as a journalist, has touched people in Northern Ireland.

Within hours of her killing, over 2,000 people had gathered in Derry’s Creggan Estate. On Friday afternoon, over 1,000 attended a protest in Derry called by the city’s trade union council and our local National Union of Journalists (NUJ) branch.

On the Saturday, NUJ members and other trade unionists organised protests in Omagh, Enniskillen, Dungannon, Strabane and Newry. A rank-and-file NUJ member took the initiative in Dungannon.

About 250 attended the rally in Omagh, called at 16 hours’ notice. Some had travelled miles: one man had driven 110 miles from Dublin.

While all deaths are tragic, Lyra’s struck a chord because she was an exceptional person. She used her great gifts not just to earn a living, but to make the world a better place. She naturally empathised with the alienated young people who were rioting in Derry on Thursday.

She understood Northern Ireland’s ‘peace process’ has left them out. As a journalist, she documented how that has not delivered for society.

One of her significant pieces of work was on suicide. She pointed out that, since the 1994 ceasefires, 4,500 have died by suicide. That’s more than died in 25 years of sustained political violence.

The reaction to her death shows there is a huge resistance to going back to the years of violence. Some of the strongest condemnation came from former Republican prisoners.

The ‘New IRA’ has shown the bankruptcy of physical-force Republicanism. The organisation emits a persistent whiff of criminality, and of senior members being agents of the security forces.

The tribute to Lyra must be to fight for a society which she’d be proud of. The poverty and alienation of capitalism and state repression, which drive young people in desperation to riots and paramilitarism, must be answered by trade union struggle for decent jobs, homes and services for all.

A young gay woman, Lyra lived in the only part of these islands where she didn’t have the right to marry the person she loved. That too must change.

In Ireland, Lyra was the third journalist killed in 23 years. Journalists are increasingly menaced internationally. Journalists and trade unionists must draw a line now, because a fourth killing can happen.