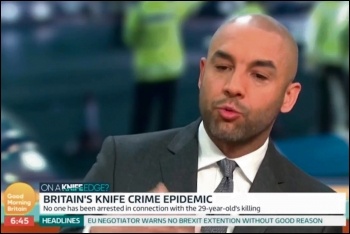 One in particular - the stabbing of Jodie Chesney, attacked near a children's play area in Essex before dying from a single wound - sparked a national debate about what is perceived to be an escalating crisis.

ITV weatherman Alex Beresford hit the headlines when he passionately interrupted an otherwise-anodyne discussion on Good Morning Britain to say prison does not and cannot work, and unless wider social problems of school exclusion, homelessness and lack of meaningful employment are addressed the problems will continue.

His intervention went viral on social media, as did the brilliant deconstruction of myths surrounding 'black-on-black' violence by the rapper and social commentator Akala.

A rise in the number of recorded deaths from sharp instruments such as knives is beyond dispute, and at a record level. Home Office figures show 285 such homicides in 2018, the highest since 1946. There was a marked increase earlier this year, although the total number of known incidents reported in the press so far stands at around average.

These crimes also disproportionately affect certain social groups. The figures for 2018, for example, show that one in four victims were aged between 18 and 24, and 25% were black. But people from those demographics make up just one in 12 and 3.3% of the UK population respectively, based on ONS data.

Does this mean, then, that we are facing an epidemic of violence that threatens to engulf a generation of young people?

The figures should be seen in the context of overall trends. 2018's record figure is only just ahead of the previous peak of 272 in 2007, and follows eight years of steady decline.

There is also the question of how these incidents relate to the scale of violence in the population as a whole.

As Akala helpfully pointed out on Channel 4 news, "there are 1.2 million black people living in London. In a bad year 50 of them will kill someone. That represents less than 0.04% of the population.

"In Glasgow in a bad year, say 2005, 40 people were murdered. That means you were more than twice as likely to be killed."

At the same time, ONS figures for 2018 show 79% of all recorded violent incidents did not involve a weapon of any sort, and only 6% reported use of a knife.

Moreover, the Crime Survey for England and Wales - which includes offences not reported to police - suggests overall levels of violence have fallen by about a quarter since 2013.

Of course, none of this detracts from the horror of the incidents which have occurred. And what we can say with certainty is that police-recorded statistics, which tend to pick up the more 'high-harm' crime, show the most serious violent crime is increasing.

So how should socialists and trade unionists respond to this emerging picture? Firstly, there is no evidence that tougher sentencing acts as a deterrent or reduces the incidence of violent crime in the long run.

Over the last 30 years, the prison population has risen 77%. Three times as many are sentenced to more than ten years for the most violent crimes than a decade ago.

But the proven reoffending rate also remains stubbornly high, at nearly a third of all those leaving custody.

Of course, this is against the backdrop of drastic cuts to prison staff, slashed by a third between 2014 and 2017. Also the disastrous part-privatisation of the probation service in 2014, described by her majesty's chief inspector as "irretrievably flawed."

It is just not possible to help many people turn their lives around when there are not enough resources put into support change in any meaningful way. Within the context of generalised austerity, prisons and probation have become the warehouses and holding pens of those least able to manage in society.

This is reflected in the shocking numbers of suicides both in custody and on release.

The mother of a released prisoner who took his own life while at a probation hostel recently complained her son had no opportunities, and kept a diary of how he wanted to kill himself because he was not seen as a "whole person."

It is no surprise that over half the current prison population were permanently excluded from school, and around half were in care as children.

School academisation, increasing pressure to remove 'difficult' children from the competitive environment, and cuts in early help services that support struggling families, have increased the likelihood of small numbers of young people turning to crime.

Austerity pushes some that way out of material necessity, and hopelessness does too in a search for some kind of meaningful identity as part of a gang. Having taken that step, carrying a knife often becomes the means to gain respect from others as desperate as you.

It may take many generations before socialists can claim the anger and alienation fostered by capitalism, responsible for so much of the violence we see today, is a thing of the past.

But in the meantime, we oppose simplistic 'solutions' which increase tension and play into the hands of the bosses. Tougher sentencing, increased powers to stop and search, and so on - these do nothing to restore public confidence, but increase the stigmatisation and criminalisation of youth.

Instead, the trade unions must lead a fightback. The Socialist Party demands a real living wage for all, mass building of council homes, free education, reversal of cuts to youth services - this could rapidly undercut the conditions that breed violence.

Calling mass action to end this devastating Tory government would be an excellent start, laying the basis for an anti-austerity government - and showing young people there is a constructive, collective route out of misery.