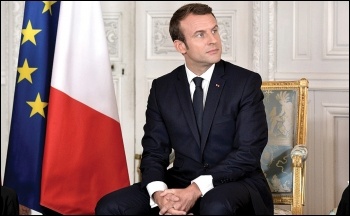 Under Macron, one in five French families do not eat three meals a day. He is committed to restoring Notre Dame as a matter of prestige. His 'amour-propre' (self-love) is worth any amount of money.

The most recent report by church charity Secours Catholique states that "poverty is not diminishing. The number of vulnerable families with children - mainly, but not exclusively, single-parent families - continues to increase.

"The poorest amongst them, more than others, express a need to be heard: poverty is not only material and isolation is felt with increasing severity. New families who are closest to the poverty line are no longer able to make ends meet, between meagre resources and growing essential expenditure.

"Finally, the percentage of foreign nationals in vulnerable situations encountered by Secours Catholique in France is significantly increasing despite their overall number being stable. This confirms their increasing insecurity in our country."

The rich preside over an increase in poverty, and Macron, the 'president of the rich', does nothing. The face-saving pledge to rebuild Notre Dame is hypocritical in the extreme.

But I think this is a false dichotomy. With the redistribution of wealth in a socialist world, it would be possible both to end poverty and homelessness and to fully fund arts and culture. We shouldn't have to choose between the two.

The fact that billionaires are coming forward to fund the restoration of Notre Dame shows there is no shortage of money. It would appear that the "magic money tree" can be conjured up when it suits.

Much as I share Tom Bawden's view in the i newspaper of 24 April that the Extinction Rebellion protesters' anger over government inaction has "catapulted climate change into the spotlight," I think they still have a way to go to meet his claim that theirs is "the biggest civil disobedience event in modern British history."

The House of Commons Library collated statistics for me, from the Home Office, of cases taken to the magistrates' courts for refusal or inability to pay Thatcher's poll tax. At over 25 million between April 1990 and September 1993, compared to just over 1,000 climate change cases so far which may end up in the courts, the poll tax rebellion still takes some beating.