France Telecom: Privatisation in the dock following suicides allegedly caused by the bosses 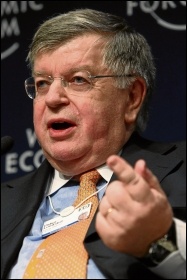 In 2006, without trade union consultation, he imposed a three-year restructuring plan in a bid to shed 22,000 posts and retrain a further 10,000 staff. However, of the 102,000 France Telecom workers, 65% had job protection status as public servants.

Management reportedly made no bones about wanting to strong-arm them to leave within three years - to demoralise them in any way managers saw fit in order to get them to throw in the towel and quit.

A new, brutal company culture apparently pushed well-qualified and adjusted employees around like pawns with the unofficial aim of 'breaking' them. Now, following a spate of suicides, Didier Lombard and six of his executives face possible imprisonment as victims of their own 'success'.

Didier Lombard, together with head of human resources Olivier Barberot and Deputy CEO (and restructuring-drive architect) Louis-Pierre Wenes, faces trial at the Paris Criminal Court and a possible two-year custodial sentence for "moral harassment". A further four executives face a charge of complicity in workplace harassment.

According to the judges' 650-page file some 4,000 France Telecom executive managers were trained each year to "make people move" by exerting maximum pressure, receiving bonuses proportionate to the number of employees they forced out.

The SUD-PTT union filed a lawsuit in 2009 for "endangering lives" through "extremely brutal management methods" and a seven-year legal investigation began, based on thousands of emails, Power Point presentations and the testimony of dozens of employees.

In a coordinated onslaught, staff were allegedly driven to despair through a range of measures designed to degrade and destabilise. Workers were repeatedly transferred away from their families obliging a mother to travel two hours to work each day.

Others were 'forgotten' during an office move leaving them in their former office for weeks without an office, desk or chair and far from ex-colleagues.

Some were given meaningless, degrading roles clearly inferior to the positions they had held. Others faced unobtainable performance objectives in roles for which they had received no requisite training or impossible targets in high-pressure call centres.

Many took their own lives at work. In September 2009, a 32-year-old law graduate, after emailing her father a suicide note, threw herself from her fifth-floor office window in Paris following a meeting to discuss the reorganisation of her customer service department.

Two days earlier, a 48-year-old technician in Troynes stabbed himself repeatedly in the stomach during a staff meeting in which he was told he was being transferred to another post.

A worker in Marseille left a note saying "management though terror" had driven him over the edge and that he was "committing suicide because of my work at France Telecom. That's the only reason." A woman in Metz tried to kill herself after being transferred for the third time in a year.

A 51-year-old father of two jumped from a motorway bridge outside the Alpine town of Annecy, leaving his wife a suicide note blaming the "atmosphere at work" and stating that his work had driven him to despair since a transfer from a back-office role to a sales target-driven call centre.

He told his colleague he couldn't sleep and couldn't go on. France Telecom staff booed Didier Lombard when he visited the dead man's workplace in Alby-sur-Cheran.

By 2009, following the 25th suicide in 18 months at a research and development centre in Brittany, Louis-Pierre Wenes (deputy CEO in charge of restructuring) was forced out by trade union pressure and restructuring itself was suspended with 500 temporary transfers frozen.

There had been angry union protests at France Telecom sites around the country to press for better working conditions. "This is now a company with the single goal of making money... employees of France Telecom were used to another work relationship with customers", said the general secretary of the CDFT trade union.

"This is a drama which resonates throughout French society given how much France Telecom is viewed as part of our national heritage" wrote the Le Figaro newspaper. Having previously dismissed the spate of suicides as a "mode" (fashion) Didier Lombard was forced to step down as CEO in 2010 accepting he had "underestimated a certain number of human factors"!

The suicides brought the unwelcome publicity and sparked government scrutiny, though thousands more had been forced to resign through workplace-triggered anxiety and depression.

The company hammered out a scheme with the unions to set aside in the order of a billion euros to boost staff morale.

A helpline was set up and 100 additional human resources staff were taken on to tackle workplace stress. Importantly employees over the age of 57 were also now entitled to work part-time on almost full pay.

The investigation has already concluded that the moral responsibility of the seven defendants for the social crisis is proven. It is now for the courts to decide on their criminal responsibility.

With 35 suicides over two years the CGT union has stressed that sentencing should serve as "a warning to all companies who make shedding jobs the alpha and omega of their strategy, in the name of profit and to the detriment of their employees' lives".

The investigation has focused on 39 employees as victims, 19 of whom took their own lives, 12 who attempted suicide and eight who suffered from deep depression and were forced to stop work as a result.

Although a comparatively unknown concept in UK law, moral harassment (or "mobbing") claims have been legally recognised since 2002 in France under the French Employment Code.

It is defined as a situation where an employee is subjected to repeated acts which may result in degradation of their working conditions that may undermine their rights and dignity, affect their mental health, or jeopardise their professional future.

HSBC France already lost a claim in 2009, though concerning only one employee and her line managers. This is the first case of institutionalised harassment that the court will have to decide.

The trial runs from 6 May to 2 July at the Tribunal de Paris. Bereaved families and friends will of course be there to demand executives be held to account for the contempt and inhumanity their loved ones had to suffer.

Socialists stand for dignity at work. We fight for the nationalisation of the major monopolies that dominate the economy and, crucially, for them to be run under democratic workers' control and management as part of a socialist plan of production.