Editorial of the Socialist, issue 1041 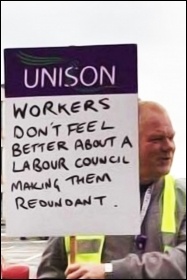 Last week's local elections have done nothing to resolve the crisis, splinters and potential splits in the main political parties.

Neither have they altered the fact that British capitalism faces a historic crisis in Brexit with no stable political vehicle for its interests. It remains the case that Theresa May and the Tory government could fall at any time.

After the 2017 general election and the 2018 local elections, the general view of the capitalist press was that we were looking at a return to two-party politics, after fragmentation and growth in electoral support for smaller parties such as Ukip and the Greens in the years preceding Corbyn's Labour leadership victory.

The election results confirm this analysis. The fragmentation of politics that the Socialist Party warned about is writ large in these results.

Two-thirds of voters stayed at home, and a quarter of those who voted looked for alternatives to the main parties in order to express their anger and disgust.

The projected share of the vote on a national level, as after last year's elections, puts the Tories and Labour neck and neck.

But this time they are both on 28% instead of 35% last year - only the second time in history that the overall share of the vote of both the two main parties is less than 30%.

The Tories were hammered: they lost 1,334 of the seats they were contesting, their worst result since 1995.

They lost seats all over the country, equally in areas that voted Leave and Remain, and they lost control of 44 councils.

The deep Tory crisis got even deeper. MPs wept at the huge losses, and called for May to go.

One example is David Amess, MP for Southend West, who said the "absolutely dreadful" results happened because they did not set a date for May to stand down.

He called for the Tory backbench group the 1922 Committee to "deal with this matter immediately when Parliament returns on Tuesday... They must take action because we are haemorrhaging support."

The Euro-elections loom in just three weeks' time, unless a deal is agreed in parliament before then. The Tories could face a wipe out.

On this occasion there was no one clear pro-Brexit alternative with which to punish the main parties.

But in the Euro-elections there will be Nigel Farage's new Brexit Party, currently projected to 'win', just ahead of Labour.

Ukip, drifting in a far-right direction and losing its 'raison d'etre' now the Brexit Party is being promoted as a more respectable alternative, lost 145 council seats.

On the same day as some senior Tories, such as Michael Gove and Ruth Davidson, called for unity and echoed May's statement that it was necessary to get on with Brexit, former leader Ian Duncan Smith called for her to go as soon as possible.

Tory party rules mean that technically a vote of 'no confidence' in her cannot be taken by MPs until December, as she narrowly survived a vote before Christmas.

But there is open discussion that the 1922 committee could re-write the rules in order to get her out.

Inherent in the crisis is the possibility of a split in the Tory party. Theresa May and other senior figures continue to aim for an agreement with Labour in order to get a Brexit deal through parliament.

But concessions on, for example, a customs union or a second referendum could split the party.

That is now something that is openly talked about. Cabinet minister Rory Stewart has told the press that a Tory split is a price worth paying to deliver Brexit.

But, despite the utter chaos and division of the Tory government, Labour lost seats too: a net loss of 84.

It seems Labour losses were overwhelmingly in working-class areas in the north west and north east where they lost 127 seats. Labour's gains were mostly in the south east.

Socialist Party members met people on the doorstep who said they would never vote again as they could not trust any politicians.

Confusion about Labour's actual Brexit position meant that they were blamed both by Leave supporters for contributing to the delay to Brexit, and by Remain supporters for not opposing Brexit.

It is not primarily because of Corbyn's parliamentary manoeuvres on Brexit, but because of the Labour leadership's failure - on this as on every issue - to go beyond parliamentary manoeuvres and launch a mass struggle, together with the trade unions, for a general election and the coming to power of a Corbyn-led government with a socialist programme.

But this was not just about Brexit. Since 2011, Labour councils have passed on Tory cuts and the reality of what this means is devastating.

One in six women's refuges have closed. Hundreds of thousands of council workers have lost their jobs and adult social care and children's services are at breaking point.

The vote to leave the EU was a cry of working-class rage after years of austerity, while the rich got richer, and people increasingly feel they have no control over their lives. This anger, and the desire for something better, has been displayed again and again.

But it cannot be assumed, as it appears to be by some Corbyn-supporting Labour Party members, and those such as Momentum, that this will seamlessly translate into continuous Labour victories.

The Socialist Party has warned again and again that if Labour councillors do not make a stand, then they will pay a price.

Instead, they should refuse to carry out these savage cuts and mount massive campaigns with the trade unions and local community.

Following three 'Corbyn surges' - in his election to the leadership in 2015, the attempted coup in 2016, and the general election in 2017 - this is now the second time when there has been no Corbyn surge in the local elections. Instead, many of those who have voted have looked for alternatives.

'Others', including local independent candidates standing on specific issues, gained 661 seats. As part of this phenomenon, the Greens gained 194 councillors.

They are described by the Guardian as the "political arm of the environmental movement".

In reality, they do not fight for the game-changing policies of socialist nationalisation and planning that is necessary to protect the planet, but if Jeremy Corbyn doesn't fight clearly for these policies there is a risk the Greens could regain support.

The Liberal Democrats celebrated gaining 704 seats. It is probably true they were helped among some voters by being the only party seen to put a clear position against Brexit.

But it must be remembered that these results mainly look good in comparison with the Lib Dem meltdown in 2015, which coincided with a general election when they were severely punished for their participation in the Con-Dem coalition government. Now some voters saw the Lib Dems again as a means to protest against the 'big two'.

In the Euro-elections the Remain vote could go three ways - to the Lib Dems, the Greens, but also to Change UK, the new party formed by right-wing Labour defectors and pro-Remain Tories.

In a general election, when the question of who will form the government is posed, the mass anger could still find its outlet in a vote for a Corbyn-led government.

But the current impasse could be broken before then by a bold socialist campaign and a mass fightback.

John McDonnell has complained about May talking to the press about their Brexit negotiations - "breaking confidence" - but in reality Corbyn and McDonnell should have made these negotiations public from the start.

They are an opportunity to go over the heads of the Tories and the Blairites to boldly put the case for a workers' socialist Brexit, including nationalisation of companies that threaten job cuts and closures, to end austerity and privatisation of public services, to protect and extend workers' rights and pay, and repeal all EU legislation that prevents these policies. It is essential this is fought for, rather than a rotten compromise deal.

A bold, socialist programme and an appeal to the trade unions to join them in leading a mass movement including demonstrations and strikes, would drive out these hopelessly divided Tories and their cruel anti-working-class government.

That requires taking on the Blairite right-wingers in the Labour Party who continue to work against a Corbyn government.

It would open up the possibility of a government and a mass movement in the interests of working-class people, prepared to challenge and remove capitalism, and to replace it with a democratic, socialist society in the interests of the millions and the environment.