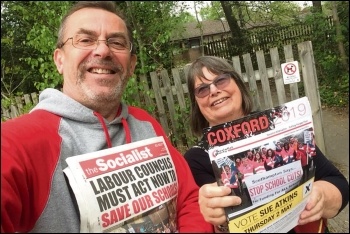 On 2 May the Socialist Party, under our electoral banner Socialist Alternative, stood in 43 council seats, plus one mayoral contest in Leicester.

We were standing as part of our ongoing campaign to oppose all cuts to council services and to council workers' jobs, pay andconditions.

On a national basis Labour leader Jeremy Corbyn has pledged that Labour is opposed to austerity, cuts and privatisation.

This is not, unfortunately, the position of the whole of the Labour Party and, at local level, the big majority of Labour councillors are continuing to vote for savage cuts.

Yet the 125 Labour-led councils in Scotland, England and Wales have combined budgets of almost £80 billion, giving them potential to act as a serious counter-power to this incredibly weak Tory minority government. They have a combined £9.3 billion in their general reserves.

They could take a stand tomorrow and refuse to implement one more cut, using their reserves and borrowing powers to fund services until they were reimbursed by a Jeremy Corbyn-led Labour government.

Their failure to do so is the most important reason for the fall in Labour's vote in some of their traditionally strongest areas.

The Socialist Party's candidates all stood on a clear pledge to refuse to implement any cuts and to fight to build a mass movement in defence of local jobs and services.

Our council candidates' results included 45% of the vote in Bolsover North and Shuttlewood, where Elaine Evans was just 45 votes short of being elected.

In Halton Brook, Cheshire, Steve Armstrong received over 22% of the vote, more than double last time he stood.

In Yarborough, North East Lincolnshire, Kieran Barlow's improvement was even more impressive. He also got 22% this time, compared to 1.9% in 2016.

Another marked improvement was in Sholing ward in Southampton, scene of the recent heroic victory against cuts by staff and parents at Valentine school, where Declan Clune's vote increased from 1.4% to 6.5%.

In neighbouring Coxford ward, where Sue Atkins had won 14% of the vote in a byelection less than two months ago, she increased her share of the vote to 16.9%.

Our candidate for Mayor of Leicester, Steve Score - former chair of the successful Save Glenfield Children's Heart Centre campaign - received 1,643 votes, 1.9% of the total.

Overall, the Socialist Party's stand in this election was on a modest scale, but included breaking new ground.

Most importantly, where we were able to, we offered a clear no-cuts alternative to the endless austerity being offered by the vast majority of councillors.