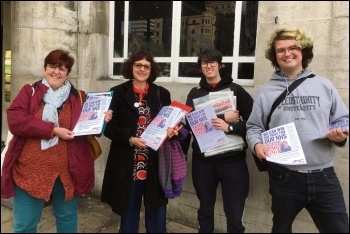 The Society of Radiographers held its annual delegate conference in Leeds on 28-30 April. Socialist Party delegates leafleted the event, and have set up a group for activists in the union.

There were debates for two days on all aspects of radiographers' life and workplace issues. This included student bursaries, and the recent hiking of registration fees by our clinical regulator, the Health and Care Professions Council. Registration is compulsory for practitioners, and fees have risen by 18%.

The legend Mike Jackson - founder of 'Lesbians and Gays Support the Miners', which organised LGBT+ solidarity for the National Union of Mineworkers during the 1984-85 strike - attended to introduce the film which portrays that campaign, 'Pride'.

Jackson spoke the next day at the conference, and gave his support to Jeremy Corbyn and socialism as the only way forward.