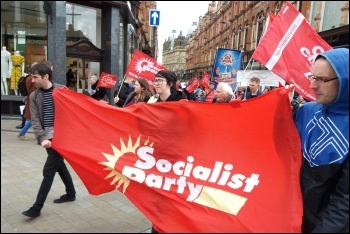 "If we want a society that doesn't destroy our planet, then it is up to us, working-class people, to come together and fight for it.

"All that this capitalist system does is put the interests of big business and their profits first.

"We need real, socialist change, based on public ownership, democratic control and meeting the needs of the many, not the few."

This was the message from Leeds TUC secretary and Socialist Party member Tanis Belsham-Wray at this year's May Day rally.

Around 300 attended the march and rally with an increased number of trade union branch banners present.

We heard from local campaigning groups such as the LS26 Homes campaign, fighting profiteering housing developers in Oulton on the outskirts of the city.

The rally also heard of the success of the Deal campaign of parents over special educational needs and disabilities (Send) school transport funding and their forthcoming protest against funding cuts on 30 June.

After the demonstration, a question and answer session on trade unions was held with Ian Hodson and local Unison activist and Socialist Party member Ben Mayor.

This discussion was proposed by young delegates on Leeds TUC including Socialist Party members and was a huge success with 45 predominantly young people attending.