Fiction: The Friends of Harry Perkins 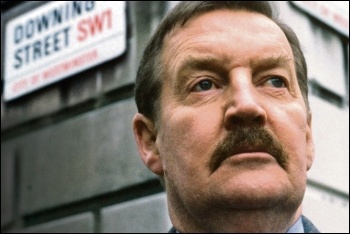 Chris Mullin, the former Labour MP, released a sequel to his highly acclaimed novel, 'A Very British Coup', in March.

That first novel was a scathing work of fiction in which the left-wing Labour MP Harry Perkins was swept into parliament and subsequently became prime minister.

Perkins won an election on the platform of abolishing Trident nuclear weapons, getting rid of US military bases in Britain, and a raft of socialist policies - doesn't sound bad, right?

A Very British Coup then illustrated the depths to which the capitalist establishment and media would go in order to prevent socialist policies in parliament challenging the profit system, ending with a coup organised by the capitalist class.

This is based in fact. Ending capitalism cannot occur through the parliamentary chamber alone. A mass movement of the working class, including strike action and the formation of workers' democratic structures, is necessary to enact a socialist programme.

It is a shame, then, that 'The Friends of Harry Perkins' is so uncritical of the neoliberal European Union, which surely would play a large role in opposing socialist change in Britain. It has done so across the continent, most visibly in Greece.

The anti-austerity Syriza government capitulated to the EU's demands for austerity and privatisation in exchange for a bailout.

Instead, Syriza could have led the way for Europe's working class by refusing to capitulate, leaving the EU, and mobilising the unions behind socialist nationalisation and economic planning.

The sequel sets itself in 2025, in a post-Brexit Britain where "the Armageddon that some had prophesied had not occurred, but neither had the economic miracle proposed by Brexiteers."

Harry Perkins has died. Fred Thompson, a left-wing journalist from the first novel, is selected as the Labour candidate in his former seat.

Thompson wins, and through a string of events mirroring Jeremy Corbyn's rise, becomes the leader of the Labour Party.

However, Thompson differs to Perkins in many ways. In his bid for leadership, he argues the party should "abandon some... cherished shibboleths" to gain power.

This is where Blairite spin doctor Alistair Campbell's glowing quote on the front cover - "brilliant, chilling and all too plausible" - begins to make sense.

The novel goes so far that Thompson meets with the character Sir Peregrine Craddock, who organised the coup in the first novel.

Craddock wields enormous power in the media, and Thompson gains his support in exchange for Labour supporting Trident.

This expresses the long-held utopian notion of some reformist leaders in Labour, that by appeasing the capitalists enough you can convince them to hand power to you.

But the more you capitulate, the less power you have - and only total capitulation will satisfy the bosses.

The novel is especially concerned with the rise of far-right groups. It is dedicated to the murdered Labour MP Jo Cox.

Themes within the novel imply that media normalisation of the far right, and sensationalist rhetoric on immigration during the EU referendum, caused the terror attack that took Cox's life.

These are important factors. But it nominalises the material effect that capitalism and austerity have in driving some people to false alternatives and brutality.

The novel features a stereotypical skinhead who physically threatens Thompson. It does not go into his background, or explore why he might have become so alienated by society. He is presented as a two-dimensional thug.

This is why approaches to far-right extremism which limit themselves to pushing for media reform and regulation miss the point.

To tackle the root cause of the rise of the far right, the trade union and Labour leaders must fight for the end of austerity and capitalism.

This means organising mass protests and building towards strike action, demanding jobs, homes and services for all, and a general election to end the Tory government which has pursued these anti-worker policies.