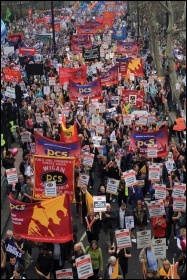 There was a 4:1 majority vote for strike action in the ballot, and turnouts above 50% in a number of the union's departmental groups.

This gives a firm basis for continuing the fight against the pay cap, and attacks on employment conditions, through coordinated group actions.

A letter from PCS and Socialist Party member Dave Lunn, reproduced below, anticipates many of the issues which the union's conference pay debate will want to consider.

Like many reps, I was absolutely gutted that we missed the 50% legal threshold for an industrial ballot by such a small margin - 2%.

But I am immensely proud of the hard work put in by reps, members and fulltime officers.

What is clear is that our lay rep structure is key to the future success of our union.

In my branch, we had ordinary members leafleting alongside reps. They understand that being a union member is a bit like being a member of a gym. If you pay the membership you won't get much out unless you get active.

Were it not for the Tories' repressive and arbitrary 50% turnout threshold - something that, hypocritically, is not applied elsewhere either in politics or big business - the 78.9% for strikes and 91.3% for action short of strike would have won a huge mandate for taking the fight to the government.

Despite this, though, we cannot escape the fact that we have come up short in the ballot. This prevents us from legally taking the necessary action to force the government to the negotiating table on a national basis.

We need to balance recognising the achievements of reps with acknowledging that this is a serious setback.

This is why it is important that we continue to campaign, but in doing so fully analyse and dissect what went well and what didn't in this and the 2018 ballot.

It will simply not be good enough just to do the same again for a third time. We need to not only organise effectively, but also understand how we can mobilise the membership.

Members who did not vote will have done so for a variety of reasons - including, for example, that they didn't believe in the strategy.

It is these members who we need to get on-board if we are going to make real progress on pay.

This will require a rethink on how we consult with the wider membership if we really want to overcome whatever barriers we face.

We will not get to the crux of why some members do not vote if we simply listen to the voices of those already convinced.

What will definitely not work is member-blaming or member-shaming, which will alienate and entrench those we have not yet convinced.

We also need a much broader debate on the way forward, with nothing ruled in or out. And importantly, this needs to be a much more open discussion, where those who put forward alternative strategies to win support are not labelled 'conservatives' or 'saboteurs' out of hand.

We need the maximum unity if we are to make the necessary progress to break the threshold in future ballots.

This should include considering linking campaigns on pay, jobs and office closures to get the biggest buy-in from members.

The reason we get such good turnouts is not just down to our excellent organisation, but because we don't organise in isolation.

Instead, our organising, campaigning and bargaining is joined up. This allows us to take members with us, as they see tangible benefits in getting active and involved.

So there will be groups and departments where there has been a strong mandate for action. The national executive committee must work with these groups in an open way and look to launch coordinated pay claims across them.

Thought should also be given to coordinating ballots for any group-specific action. Alongside this, PCS must up the ante in our campaigning against the anti-trade union laws.

Our general secretary currently holds a senior role in the Trade Union Congress, and must use this to build a coordinated campaign among the unions.

With our annual conference coming up very soon, there is a perfect opportunity to discuss all these issues and put through emergency motions at our mandating meetings.

While this will be the first stage of rebuilding the fightback, there needs to be an ongoing dialogue over the coming months across all structures of our union, responding to political and industrial events, as we do not operate in a vacuum.

This is a temporary setback. But if we learn the lessons from our previous campaigns, listen to our members, and see debate and constructive challenge as a positive thing, then rather than an end to the campaign, the result can be a springboard to winning a ballot and delivering action capable of advancing the interests of members.

That is the fundamental reason I became a rep.

The PCS leadership elections close on Thursday 9 May. As we go to press, Socialist Party member Chris Baugh is campaigning for re-election as assistant general secretary, as official candidate of Left Unity, the union's broad left group.

Socialist Party members Marion Lloyd and Dave Semple are also standing for election to the national executive committee as part of the Left Unity-backed 'Democracy Alliance' slate. Results and reaction to follow...