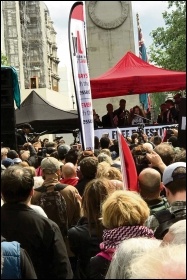 Several thousand protesters including Palestinians, Muslim organisations, the Socialist Party and other left-wing groups marched through central London on 11 May to mark Nakba Day.

'Nakba' is the Arabic word for catastrophe. During the violent upheavals that accompanied the establishment of the state of Israel in May 1948, over 750,000 Palestinians were forced from their towns and villages, becoming homeless and impoverished.

A further 300,000 Palestinians were forced from their homes in the 1967 six-day war. Since then, Palestinians in the West Bank and Gaza have lived under an increasingly unbearable and brutal Israeli occupation.

Palestinians in the 'open prison' of Gaza for over a year now have been protesting at the Israeli military's border security fence, against the Israeli government's blockade of the Gaza Strip, and demanding to be able to return to their lands before they were displaced. Nearly 200 Palestinians - the overwhelming majority civilians - have been killed by live ammunition during these protests.

The star speaker was 18-year-old Ahed Tamimi - a Palestinian from the West Bank whose case spread in the news internationally after she was jailed for slapping and kicking an Israeli soldier in December 2017 who wouldn't leave her family's courtyard. The incident took place just after Ahed heard that her cousin had been shot in the face by the Israeli military.

"I don't want to speak today about our suffering. We choose to suffer for freedom and justice. Injustice is everywhere," said Ahed.

However, while Ahed spoke for only a few minutes the Palestinian ambassador to the UK, Dr Husam Zomlot, made a very long but vacuous speech.

Many left groups present demanded a 'free Palestine' but without explaining how this could be achieved in the context of a crisis-ridden capitalist region. The Socialist Party, in contrast, argued that Palestinian self-determination - given the starting point of acute distrust between the two communities in Israel/Palestine - can only be won by a working -class struggle both within the Palestinian enclaves and within Israel for a socialist Palestine along with a socialist Israel.

Socialist Party members distributed hundreds of leaflets advertising our forthcoming meeting, sold the Socialist and engaged in some very positive conversations with Palestinians.