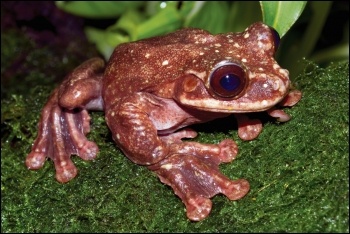 One million species face extinction in the next decades, like this extinct frog, photo by Brian Gratwicke/CC   (Click to enlarge)

It paints a damning picture of the failures of global capitalism and its destruction of our planet in pursuit of profits, with some alarming statistics about the scale of the destruction and the time we have left to reverse course.

Almost one million animals are under threat of extinction in the next few decades, with almost one in four plant and animal species at risk. In some regions there are 75% fewer insects than 25 years ago, dealing a massive blow to crop yields and increasing starvation risks.

Unsustainable farming and fishing, as well as rampant deforestation and pollution, are to blame - with the profits derived from the exploitation of workers and the environment going straight into the pockets of the billionaire bosses.

Here, as in the rest of the world, we also see a massive increase in flooding caused by the increasingly frequent extreme weather events, in turn the result of unsustainable global warming.

By 2100 we could see a global rise in temperature of up to 4ºC, which would demand an extra £1 billion a year of flood defence investment in England alone.

The Tory government is contributing to this growing crisis having given the green light to companies to frack for oil and gas, despite massive public opposition.

But government rules that pause fracking drilling operations - if they cause earthquakes - are too restrictive for tax-avoiding, multibillionaire boss Jim Ratcliffe of petrochemical company Ineos who wants the limits on tremors lifted.

Even after these stark warnings by the UN, governments around the world have failed to even meet the modest targets put forward in 2011, with 13 of the 20 'Aichi' biodiversity targets not being met, especially around sustainable production.

We cannot wait for the bosses and their political representatives to act against their own self-interest.

Even the UN report itself agrees, saying that these targets can "only be achieved through transformative changes across economic, social, political and technological factors".

The recent student strikes and actions by Extinction Rebellion show there is anger and a realisation that climate change is a growing threat. It's possible to reverse course.

However, we must demand socialist change to achieve this turnaround.

This requires the nationalisation of giant agribusinesses, 'big energy' and public transport, under the democratic control of the workers in those industries. Fossil fuels could then be quickly replaced by green energy and sustainable production as part of a planned economy.

The trade unions should be stepping up their demands for a massive expansion of jobs in environmentally friendly technologies to replace employment in the fossil fuel industries.

A united struggle of students and workers organised around a socialist programme could break the toxic grip of capitalism on our planet and secure a better future for all.