Link to this page: https://www.socialistparty.org.uk/articles/29155 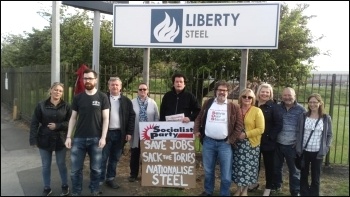 On Wednesday 22 May, British Steel, the UK's second biggest steel firm, was taken into compulsory liquidation by the Insolvency Service.

The next morning's front pages of two local newspapers graphically described what this will mean for local communities. The Scunthorpe Telegraph pictured a desolated steel plant closed in Redcar in 2015, with the headline: "Don't let this happen to us!"

The Teesside Gazette ran a black-tinged front page with an image of a lone steelworker, accompanied by a quote about how the industry had again been "shafted by heartless private investors and a government unwilling to pull their finger out."

The "heartless private investors" in British Steel's case are Greybull Capital, the private equity company that bought the steel plants from Tata Steel for just £1 in 2016, at the height of the last steel crisis when 5,000 jobs were lost in the industry in a single month.

Greybull 'saved' 4,000 jobs, rebranded Tata into British Steel, and returned it to profit within 100 days, a seeming success story.

But this was achieved at the expense of the workforce, with 10% of the jobs going and a pay cut in the first year.

After two years of profits, British Steel returned to making losses from mid-2018, required a £120 million government loan to meet its carbon emissions bill from the European Union, and at the High Court this week the judge said that it has debts of £880 million and would run out of cash at the end of the week! The company's request for a further £30 million loan was refused because the government was advised that it would be illegal under EU state aid rules.

Greybull shouldn't get another penny anyhow; it has form when it comes to failed takeovers. It 'rescued' Monarch Airlines, the Comet electrical chain and others, all of which collapsed, putting several thousand staff out of work.

And while British Steel has been going bust, Greybull has been charging 9.6% interest on loans to it and has taken £20 million in fees and interest in the last year.

This is the reality of 21st century capitalism. So it's welcome that some steel trade union leaders and Jeremy Corbyn have called for the government to consider nationalisation to save the industry and jobs.

Jeremy Corbyn has said: "....the government must act to take a public stake in the company to secure the long term future..." 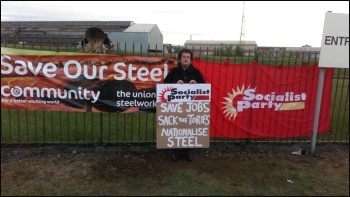 The Socialist Party believes that they should be shouting for nationalisation from the rooftops. No trust can be put in another private takeover.

This is a national emergency with 25,000 jobs at risk. It would actually be cheaper for the government to pay limited compensation (not to fat-cat owners, but on the basis of proven need) and subsidise the industry for a period, than the costs of paying for 5,000 redundancy packages and dole payments for another 20,000, and the loss of workers' taxes, not to mention the depression of local economies.

Not just that, if steel is nationalised then the government could use its procurement powers to secure contracts to supply the steel at guaranteed prices for infrastructure and construction projects.

Rail track, housing, hospitals and schools all need steel. A massive new wind farm is being built in the nearby Humber estuary that needs steel for the masts and blades.

So not only would steel jobs be saved, but new jobs can be created as part of a mass programme of public works.

And if nationalisation of the steel industry breaks EU rules, then what better issue from which to make the socialist case for leaving the capitalist EU, in the interests of working class people.

That was the message that Socialist Party members took to the main entrance of the Scunthorpe steel works early on Thursday 23 May, joining a solidarity protest called by local window cleaner and Labour activist Stuart Maw, who had been interviewed on the Jeremy Vine radio show the day before.

Stuart told us that he'd called the protest because on hearing the news of British Steel going bust, he thought to himself: "What can I do, I have to do something, all I can do is make a placard saying 'honk your support' to show the workers that they have public support and solidarity."

And the response shows that just like four years ago, the local community can be mobilised in their thousands, because the steel works is the heart of the town and without it, Scunny will be another Redcar.

But the steel trade unions need to take action, not just wait for a new buyer to turn up. That means petitions, yes, marches through the town, yes, but it must also mean preparing for an occupation of a strategic site or sites on the steelworks to demand socialist nationalisation and public investment.

Theresa May will be gone soon and the Tory government could collapse at any time. The Tories are so weak that with bold and determined leadership the trade unions could force even a Tory government to at least nationalise British Steel.

And even if that was only 'temporary', a Jeremy Corbyn led government could make that permanent and bring the rest of the steel industry into public ownership as well.

This version of this article was first posted on the Socialist Party website on 24 May 2019 and may vary slightly from the version subsequently printed in The Socialist.