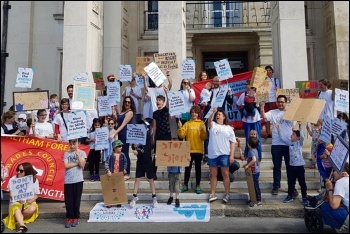 Parents and children gathered outside Leeds Art Gallery on 30 June to send a message of opposition to special educational needs and disability (Send) funding cuts. Parents speaking from the platform explained the horrific impacts this is having on their children's education.

Julie Baird, one of the organisers of the Leeds protest said it "was well attended by around 250 supporters, which included members of Disability Empowerment Action Links (Deal). There were 28 other demonstrations and marches around the country.

"This is just the start of the Send revolution, mainly directed at the Send education system that is broken. However all the services that are supposed to support disabled people need complete reform."

from Unite Community and other trade union and labour movement activists, including the Socialist Party.

However, this has not extended to using council powers to license deficit budgets in schools for up to three years to avoid cuts. The council has not utilised reserves and borrowing powers to stop doing the Tories dirty work of cuts. Leeds trade union council called for this in their recently produced alternative budget.

The parents in Deal will welcome the open door to listen to them, as a result of their campaigning efforts. But it is action to stop and reverse cuts to Send education and other public services that will have a lasting impact on their children's futures.

This battle is only just beginning.