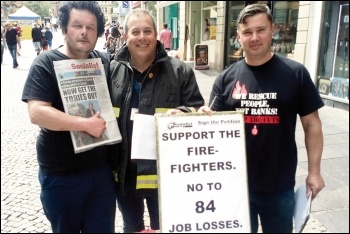 They will be demonstrating against another severe round of cuts being proposed by South Yorkshire Fire and Rescue Authority (SYFRA) to jobs and the fire service in the county.

To 'save' up to £4 million a year, SYFRA want to reduce crewing levels on fire engines from five to four which will see the loss of 84 firefighter jobs over the next three years, and reduced night-time cover at Sheffield Central and Doncaster stations from two to only one engine.

These cuts follow on from a halving of firefighter numbers in South Yorkshire, fire station closures and the introduction of a 96-hour continuous shift system that was ruled unlawful by the High Court last year.

These cuts are due to the Tory government cutting funding to SYFRA by 30% over recent years. In the past, these cuts have then been voted through by a Labour dominated fire authority.

However this time, councillors only "noted" the Chief Fire Officer's report proposing these further cuts. Ten out of the 13 current representatives from the four South Yorkshire councils are Labour. The protest lobby is to demand that Sheffield Labour council and their representatives on the fire authority now vote down these drastic cuts altogether.

While cutting fire services, SYFRA has built up over £25 million in reserves. The FBU has, like the Socialist Party, called on the authority to use these reserves to maintain jobs and services, using a no-cuts stance as a platform for fighting for 'fair funding'.

The Socialist Party has been campaigning with the FBU against these cuts and to force a public debate at the Sheffield council meeting, and have been invited to have a speaker from the top of the FBU's campaign fire engine at the protest lobby.