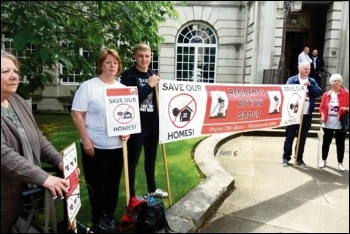 Campaigning to save homes in Leeds, photo by Iain Dalton   (Click to enlarge)

"Leeds City Council hear us say, vote to save our homes today" was the chant that rang out from the tenants of Sugar Hill Close and Wordsworth Drive in Boulton, Leeds as they and their supporters lobbied the council to block plans from the landlord Pemberstone to demolish their homes and build luxury housing for sale instead.

With over 20,000 on the council house waiting list in Leeds none of these tenants are likely to be rehoused in council homes if they are evicted to make way for the development.

The campaign has found wide support within the labour movement. As the targeted housing is former miners housing, the National Union of Mineworkers has backed the campaign to the hilt.

So too has Leeds Trade Union Council. Executive committee and Socialist Party member Iain Dalton was one of the speakers who explained how the trade council has supported a number of campaigns against profiteering developers, including Oulton and Little London, and is calling for a plan to build council housing in the city instead.

The planning meeting ended after three hours of debate with the decision deferred. Socialist Party members locally will continue to support the campaign to save these homes.