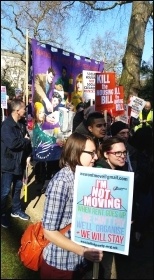 For decades, repairs on the homes on the Lawrence Street estate in Canning Town, east London, have been neglected. These homes have also been under threat of demolition. 30 residents met on 30 May to discuss their problems.

The kitchens are in a terrible state. The windows need fixing. "What about mould?", the chair asked. Most of the hands shoot up.

Fly tipping and public safety are pressing issues. "Do you feel safe?" Everyone laughs. "Do you see police?" "No!", the room bellows back.

Everyone present filled in a survey with their issues. The campaign is going to keep a log, and hold the council to account. Most worryingly, the estate is threatened with demolition. This must end now.

Newham's Labour councillors were meeting next door. Eventually one, Shaban Mohammed, turned up to the meeting with the local right-wing Labour MP, Lynn Brown. The MP didn't say much. And didn't stay long!

The councillor complained there is a housing shortage. Then build more council homes!

He said he used to oppose regeneration, before he was a Labour councillor. Now he wants "regeneration that works for tenants." If that means fixing the repairs pronto, great! But if that means demolishing the estate and jacking up the prices, so tenants are forced out, absolutely not!

Before the councillor spoke, people were demanding repairs. After he spoke, there was talk of a rent strike!

The Socialist Party demands that the campaign starts by saying "we won't move", was echoed in the discussion. Just like the Butterfields tenants did in Waltham Forest, when an entire street that successfully fought eviction.

The Labour council should immediately stop making cuts. And use its enormous reserves - £500 million in Newham - and borrowing powers to invest in services and repairs and build council homes.

Housing maintenance workers in Newham have been forced to strike against pay cuts.

Lawrence Street residents can take inspiration from last year's victories against school privatisation/academisation in Newham by the National Education Union led by its secretary, and Socialist Party member, Louise Caffaro.