Fight the closures, save every job!

Workers are being made to pay the price of economic uncertainty, including around Brexit, as bosses seek bigger profits elsewhere. 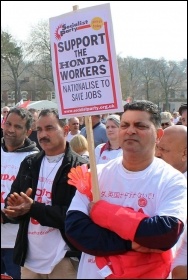 2000 people marched through Swindon in protest at Honda’s plan to close its plant in the town, March 2019, photo S. German   (Click to enlarge)

Ford's plans to close their engine plant in Bridgend adds to a long list of threatened sites. Nissan in Sunderland, Honda in Swindon and British Steel in Scunthorpe have all announced closure plans this year.

Each of these threatens tens of thousands of relatively well-paid jobs and devastation to the local communities.

Retail workers are being hit too as the crisis in the high street continues. The number of empty shops rose by 7,500 last year. Big chains including M&S, Debenhams and Boots have announced store closures with thousands more job losses.

Workers will fight to defend their jobs. Thousands joined Unite the Union's march through Swindon in defence of Honda workers. The fightback against the jobs massacre must be built and coordinated. This includes preparing for industrial action wherever necessary.

Building the fightback will be one of the key discussions of the National Shop Stewards Network (NSSN) conference on 6 July this year. The NSSN is a rank-and-file trade union body, founded in 2006 by Bob Crow, the late leader of the transport workers' union RMT.

Speakers at the conference include Paddy Brennan, Unite convener of the Honda Swindon plant. You can book your place today.

The decimation of jobs must be stopped. The Socialist Party calls for the nationalisation of threatened plants and shops to save jobs. Workers' livelihoods will only be safe from the designs of greedy bosses if we take the decisions out of their hands.

Taking the biggest businesses into public ownership under democratic workers' control would allow the economy to be planned to serve the needs of the many, not the profits of a few.