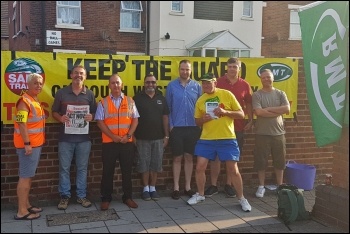 Talks between the RMT transport union and South Western Railway (SWR) at conciliation services Acas have failed to achieve an acceptable agreement. RMT guards have voted to recommence strike action - this time for five days beginning on 18 June.

While SWR agreed to the presence of a guard, it has refused to agree the duties that guards will perform - a guard in name only. For RMT this fails to address the key issues of safety and access for passengers.

What happens when an accident occurs? Will SWR guards be trained in their safety critical role and have control to open doors and take passengers to safety, if the driver has been disabled? What happens to passengers who need help with assisted access on the network? Who will SWR provide to ensure there is trained staff to assist?

SWR has pushed RMT guards into 35 days of strike action over the last two years by its intransigent refusal to reach an agreement. Failing to ensure safety, SWR has also failed in their franchise delivery to provide increased timetable capacity and new rolling stock resulting in losses of over £100 million.

As car congestion and concerns over air pollution and associated health problems grows, the case for rail renationalisation also grows. A fully funded, integrated public transport system providing safe, accessible and affordable travel must be a key part of the campaign for an immediate general election to bring an end to the failed decades of privatised rail.