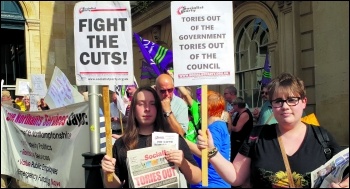 The terrible murders of two young children in Northamptonshire have been published in reports called 'serious case reviews'. Dylan Tiffin-Brown, aged two, was murdered by his father in December 2017 and Evelyn-Rose Muggleton was murdered in April 2018 by her mother's partner.

Both reports comment on the impact cuts made by Northamptonshire's Tory council have on children's services. The reports refer to high staff turnover, management sick leave and inadequate IT systems.

Although the serious case reviews made clear that it was unlikely anything could have been done to prevent the "single catastrophic incidents" that led to the murders, there is no doubt that council cuts have contributed to and been a huge cause of the dire staffing and workloads for social workers.

Over 260 children needing social work intervention did not have an allocated social worker. Some staff had caseloads of up to 50 children.

25% of qualified social worker posts were filled by agency staff, and therefore temporary, and a further 18% were not filled at all!

In August 2018, Northants council became the first to go technically bankrupt for many years. It passed a further £70-million cuts budget.

The council already outsourced huge parts of its services and will now privatise children's services to an 'independent' organisation.

Ray Jones, a social work academic and former director of Wiltshire children' services, made a damning comment on the privatisation plans:

"Instead of the focus being on building a stable secure workforce... there will be the distraction of creating a new Trust... the two new Northamptonshire councils will be accountable for a service where their only influence will be through contract management of an independent company outside the transparency of public services."

The Socialist Party completely opposes the privatisation of Northamptonshire's children's services. We call for full funding for all the county's vital public services and a reversal of previous cuts.

If the government doesn't do this, the councillors should. If they refuse, they should stand aside for anti-cuts councillors who will.