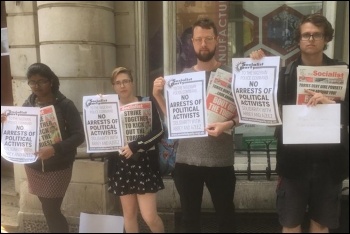 He has now been arrested by the political police DSS.

Abbey was the candidate for the Socialist Party of Nigeria (SPN), set up by DSM, for Oyo governor in this year's general election.

The police meted out similar harassment to sacked Sumal worker, Azeez Arowosegbe. Scandalously, the National Union of Food, Beverage and Tobacco Employees back the management.

When Abbey and others met with Sumal management at the police station, Abbey, Azeez and members of DSM/SPN were not even allowed to sit! Only their lawyer was.

Sumal have accused Abbey of 'inciting' the workers against management. But it's the workers who invited Abbey to help, after the terrible role played by the union leaders.

It's clear why Abbey and Azeez have been arrested. Management want to cut off the head of the movement, and wear activists down, so the workers are forced to agree to a rotten compromise.

Sumal management even tried to bribe Abbey, which he rejected. The same can't be said for others!

DSM said: "Several cartons of biscuits were offloaded by policemen from the vehicles that had brought the Sumal Food reps" to the police station meeting. "One can only imagine how much must have exchanged hands."

The Socialist Party organised a protest outside the Nigerian embassy in London on 6 June. Officials initially refused to take our letter demanding an end to the harassment of Abbey and Azeez - denying that we even had the right to protest - but relented after pressure.