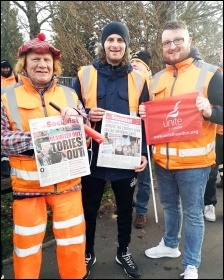 Other bin workers on strike in Birmingham   (Click to enlarge)

Bin workers in Newham, east London could have lost over £20,000 each over the last decade.

The regional officer for their union Unite, Onay Kasab, said: "Backsliding and 'ducking and diving' has been the hallmark of the council's attitude to this issue."

Onay went on to say: "If the strike goes ahead, most household bins in the borough won't be collected and there could be an unpleasant stench in the hot weather, worthy of Victorian London.

"This gives an added incentive for the Acas talks... to succeed and deliver a fair settlement for our members.

"Newham Council has repeatedly failed to live up to the agreement it signed more than a decade ago for the progression from grade 3 to grade 4 and then grade 5 on the national pay scales."