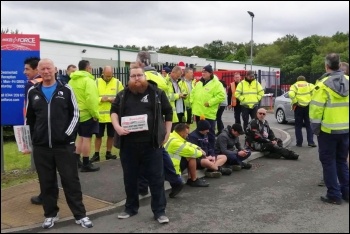 Communication Workers Union (CWU) members at courier company Parcelforce set up a picket line on 12 June outside their Swansea depot.

They walked out in support of their local union rep who is being threatened with disciplinary action, and who has been forced away from his job for the past 21 weeks.

CWU members' frustration at the lack of progress to resolve this dispute blew up when workers walked out in an attempt to remove this threat to their union rep. There is recognition that if any victimisation by a bullying management is left unchallenged, then further attacks on members would almost certainly take place.

CWU officials were on site attempting to resolve this longstanding dispute.

Socialist Party and Swansea Trade Union Council members were warmly greeted on the picket line and thanked for their support and solidarity.