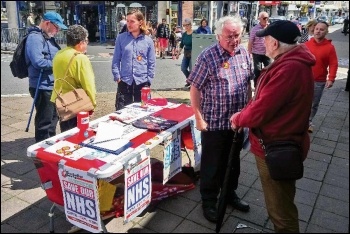 Campaigning on the NHS in Newton Abbot, photo by Richard Worth   (Click to enlarge)

With the local and European elections over, the streets of Newton Abbot, Devon, were clear of political parties campaigning just for people's votes. But Torbay and South Devon Socialist Party never stops campaigning; we were out there again on 15 June.

Our stall against the Tory privatisation of the NHS and the threatened closure of Teignmouth Hospital engaged with many angry people wanting to do something to stop the hated Tories, who showed support for our campaign against austerity, NHS privatisation, and so on.

We also gained the ear of a number of young people who were keen to fight Trump and the Tories. A young woman who wanted to stop climate change and live in an 'ethical' world, bought a 'Dump Trump' badge and quickly put it on to show her opposition to his racism and climate denial.

We sold 21 copies of the Socialist, and received £28 in donationsfor the fighting fund to support the Socialist Party's campaigning work. That's a total of £49 raised from the people of Newton Abbot to fight for a publically run NHS, quality education for all, no to Trump, and for socialist change not climate change!