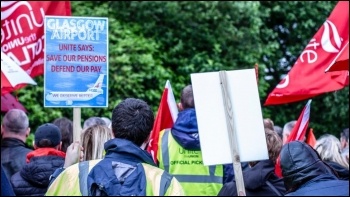 The strikes for pay and pensions justice at Glasgow and Aberdeen airports are a fight for every trade unionist and worker in Scotland and beyond.

The workers and their union Unite deserve our full support and solidarity. They have been treated disgracefully by a profiteering employer intent on tearing up every right the unions have won in the past.

The strikes so far have proved, however, the outstanding determination of hundreds of staff pushed to breaking point. Below inflation pay rises - cuts in reality - and now an attempt to tear up the pension scheme the bosses agreed to in 2016 are the straws that broke the camel's back.

The current pension scheme at Glasgow, Aberdeen and Southampton - run by AGS Airports - is to be axed at the end of June, with staff forced onto a defined contribution scheme that ends the far better current defined benefit pension.

In truth, since AGS took over there has been one attack after another on the workforce. The actions of Glasgow AGS bosses, the highest paid of which receives £277,000 a year, are a legacy of privatisation.

Airport services, security, fire safety crew, maintenance, and engineering used to be government-owned. But the Thatcherite privatisation programme in the 1980s saw them sold off and then eventually dismantled and sold off again as greedy corporations saw the chance to take over lucrative businesses.

Since then it's been a race to the bottom in terms and conditions, jobs and pay. The union is suspicious that the removal of the pension scheme is linked to a further sell-off of the company, making it more lucrative for potential buyers and shareholders.

Strikers have referred time and again to the scandalous way in which they have been treated by the company. But AGS got their answer when around 90% of union members voted to strike.

The union is ensuring the strike action is escalating in the run up to the peak summer holiday time.

Already the action has had a huge impact on the running of the airports.

Yet as Unite has said, a mere £234,000 from AGS would cover the claimed increased cost to the company of maintaining the current pension arrangements. £40,000 less than the highest paid director.

The national TUC and STUC leaderships should call co-ordinated action for pay rises to meet the cost of living, stop attacks on pensions and jobs and end austerity. This dispute in the airports has the potential to have a major impact.

AGS clearly want a race to the bottom in wages and conditions in order to boost profits for the company, as is typical with big business capitalists. We demand AGS is brought into public ownership and workers' terms and conditions are defended.