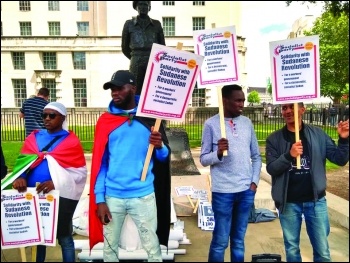 On 22 June Socialist Party members took part in a protest outside Downing Street in central London, called by the Sudanese community in Britain.

It was called in response to the continued rule of the Transitional Military Council (TMC) and the recent mass killings and rapes carried out by the notorious Rapid Support Forces paramilitary organisation - whose leader General Mohamed Hamdan Dagalo, known as Hemeti, is becoming the real power in the TMC.

Protesters in London railed against the British government which, while condemning the TMCs violent crackdown, continues to "engage" with the TMC.

The demonstrators were clear in their opposition to the TMC but there were differing opinions about what needs to happen next.

Demonstrators took our Socialist Party placards which called for a workers' government and for a democratic, socialist Sudan.

Our leaflets which put forward our programme of what is needed were taken by most of the demonstrators.

Naomi Byron gave solidarity greetings from the Socialist Party and Committee for a Workers' International.

She also outlined key demands; such as for the local neighbourhood committees to link up on a city-wide, regional and national basis, which can then form the basis for a revolutionary government of the workers, the poor and all those exploited by capitalism.

Such a government could enact a programme of democratic public ownership of all the major companies, banks and multinational corporations, so that these resources could lay the basis for establishing a democratic socialist Sudan. This was met by cheers from sections of the protest.

Using the Socialist's centre page feature on Sudan we sold 20 copies and several people came up to us asking for more information about the Socialist Party.

No trust in imperialist powers

Around 200 people, mainly from a Sudanese background, gathered in City Square, Leeds, to echo their opposition to the brutal repression of the state-backed Rapid Support Forces (RSF).

The brutality that those fitting for an end to military rule are facing was expressed by a number of speakers, with revolutionary songs and chanting interspersing this.

Iain Dalton addressed the rally bringing greetings from Leeds Socialist Party. He called for the disbandment of the RSF and those guilty of the horrific repression to be tried by revolutionary tribunals.

He outlined that the Sudanese working class should place no trust in the establishment and imperialist powers, but rely on their own organisations to convene elections to a revolutionary constituent assembly and form a workers' government.

Armed with a programme of bringing the key sectors of the economy into public ownership, under democratic workers' control, a workers' government could transform the lives of ordinary Sudanese workers and poor and bring about a democratic, socialist Sudan.