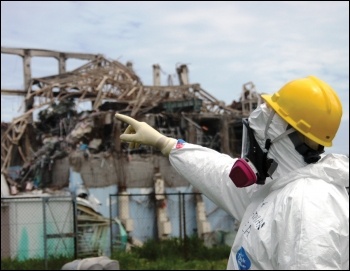 While lauding the marvellous TV series Chernobyl, the capitalist press has gleefully criticised 'socialism', and even Corbyn, for the Ukrainian nuclear disaster.

The explosion of one of Chernobyl's reactors was a 'level 7' incident on the International Atomic Energy Agency's international nuclear event scale.

Level 7 is the top of the scale and describes an "accident causing widespread contamination with serious health and environmental effects."

In 2011, the Fukushima Daiichi nuclear plant in Japan suffered a meltdown in no fewer than three reactors, also assessed as a level 7 incident, following an earthquake and tsunami that breached the plant's sea wall.

In 2012, the Economist said of the Tokyo Electric Power Company, Tepco: "the [private] operating company was poorly regulated and did not know what was going on.

"The operators made mistakes. The representatives of the [government] safety inspectorate fled. Some of the equipment failed.

"The establishment repeatedly played down the risks and suppressed information about the movement of the radioactive plume, so some people were evacuated from more lightly to more heavily contaminated places."

Another official report said the disaster was manmade and the plant was "incapable of withstanding an earthquake and tsunami" - and yet it was built in an earthquake zone.

In 2016 it was revealed that Tepco officials were instructed not to call it a "meltdown" - measured as 5% of fuel damaged - despite the fact that 25 to 55% of the fuel was damaged.

Tepco's president has said: "I would say it was a cover up... It's extremely regrettable." It begs the question - what else has been and is being covered up? It is difficult to get proper information.

When environmental groups in California expressed concerns about the safety of seafood, the authorities carried out tests and declared the radiation "harmless and temporary."

In July 2011, Tepco said it was "unable to control the spread of radioactive material" from Fukushima. In 2013, radioactive isotopes were detected by over 40 monitoring stations all around the world.

The amount of damage to the reactor cores was 'unknown' according to Tepco. They reported 70% damage to fuel in unit one, 33% in unit two, and only reported complete meltdown in August 2014.

In February 2014 they said they had reviewed the radioactivity data and found it "significantly higher" in the groundwater than earlier reports.

Capitalism's capacity for inaction, withholding information, and covering up danger seems at least as serious with Fukushima as Stalinism's crimes at Chernobyl.

Crucially, neither system had democratic workers' control of the plants and relief measures, or democratic accountability of officials to the majority of the population.