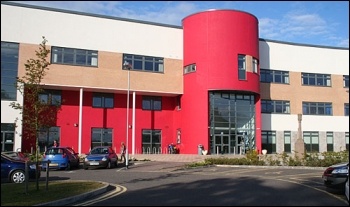 "If it hadn't been for this school I would have ended up in prison" were the words of one former student who came to support the picket line on 20 June, the third day of strike action by members of the NEU, NASUWT and Unison education unions at the Grove Academy in Harrogate.

Socialist Party members joined the picket lines once more to stand shoulder to shoulder with workers fighting the impacts of austerity.

There has been tremendous support from across the education sector locally with a march around the six Harrogate secondary schools that refer students to the Grove seeing head teachers from those schools supporting the strikers and speaking to the media calling for the Grove to be saved.

The immediate threat to the school is that North Yorkshire County Council is cutting £2 million from its budget for pupil referral units across the county, without any plans or proposals for how this will affect the services provided by places like the Grove. After losing 25% of its budget in 2018, the Grove now faces losing a further 25-40%!

A further three days of strike action has been called to continue the pressure to demand a fully-funded service at the Grove.

The strike shows the need for a reversal of the cuts to education by central government and the reintegration of the fragmented education system, with decisions about schools and their funding under the democratic control of staff and parents.