Link to this page: https://www.socialistparty.org.uk/articles/29316 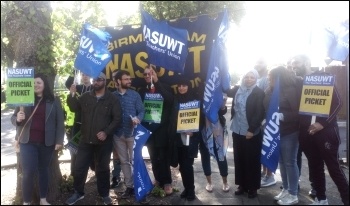 Some students have been reported to carry knives, threaten staff and frequently fight, with violence in the classroom and playground, including a weekly 'Thursday fight'. Staff have been physically harmed. For example, one teacher has been punched in the face, and another threatened with a weapon attack last year by a student who is still allowed to attend.

NEU members could join the second day of action in July. The teachers want a safe working environment for staff and students.

While negotiations have introduced some new school policies, they have not resulted in practical measures that address poor behaviour and support classroom teachers.

Paul Nesbitt, NASUWT West Midlands executive member, said: "The lack of effective action by the employer means we have been left with little choice but to call this strike action."

This version of this article was first posted on the Socialist Party website on 27 June 2019 and may vary slightly from the version subsequently printed in The Socialist.

Birmingham Socialist Party: What next to defeat Tory austerity?