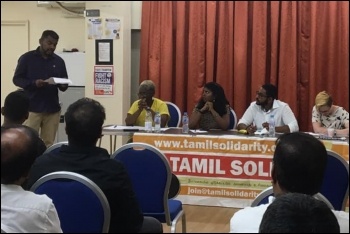 Solidarity Day is an opportunity to bring together the struggles of oppressed communities, trade unionists and students and build the fightback against all oppression.

The event consisted of two sessions and the audience fully participated in the debates and discussions.

The first session was on the current situation in Sri Lanka, the recent repression of the Sri Lankan government of the Muslim community and how to build a fightback. The second focused on the rights of minorities and the role of trade unions.

The session highlighted that the promised 'peace dividend' following the end of the civil war in 2009 - a brutal genocidal slaughter of 146,000 innocent people - hasn't materialised.

The Sri Lankan government is in political crisis and in order to survive and maintain power is stirring up tensions along communal lines and has unleashed anti-migrant racist propaganda. Both the ruling parties are preparing for the presidential election that is scheduled to take place later in the year.

The second session included speakers from Unite and Unison unions, Socialist Students and the national chair of Tamil Solidarity. They focused on the plight of refugees and asylum seekers in the UK; 'slave labour' in detention centres; how government cuts are affecting young people in minority communities; and the increase in racial attacks and racism affecting Black and Asian workers.

This session showed how trade unions needed to take a stand against racism and austerity, to stop the scapegoating of migrant workers for the economic problems; the power of collective action, and encouraging people to join a union.