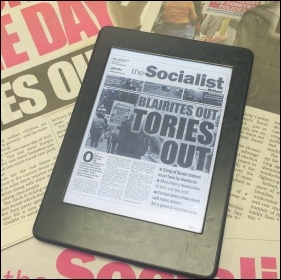 Socialist Party members play an important role - in some cases leading them - in local and national fightbacks against Tory austerity and in trade union strikes.

In all our campaigning work the Socialist is an essential tool in putting forward the key demands to advance and win these struggles.

This positive role of the Socialist is often reflected in the sales of the newspaper. Socialist Party members in Bridgend and Cardiff sold 46 in one weekend campaigning against the threatened closure of the Ford plant.

At one strike meeting of cleaners, catering workers and security guards employed by Mitie at Sellafield, Cumbria our members sold 19 copies, and over two demonstrations in London in support of the Sudanese revolution we sold 52 copies of the Socialist.

Also 57 were sold at meetings and campaign stalls in Barking in the week following the devastating fire at the flats in Barking Riverside. Added to this is the tremendous 203 copies bought by delegates at the recent Unison union conference.

And now, the Socialist is also available in an e-reader format. For a monthly subscription of only £2.50 readers can get the e-paper every Wednesday in a format that is suitable for iphones and ipads, android phones and tablets and for Kindle devices.

It also means a big saving on postage costs for the Socialist Party. Would you consider changing your Socialist subscription to an e-subscription?

Of course, it's vital that all our members still take sufficient supplies of the Socialist to sell on their local campaign activities and at workplaces, colleges and universities, as well as to friends, neighbours, and work colleagues.