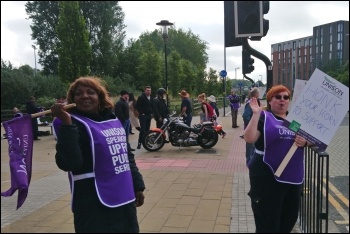 They also expect some staff to commence collecting work materials in their own time instead of the university's as is currently the case. In addition, they refuse to become a Living Wage employer unlike many other universities.

There were well attended and lively picket lines at several entrances and a mood of defiance over the university's intentions. The vice chancellor, who is currently on a basic salary of £447,000 a year plus an £80,000 bonus and other perks, has demanded a real terms pay cut for his lowest paid workers.