Link to this page: https://www.socialistparty.org.uk/articles/29350 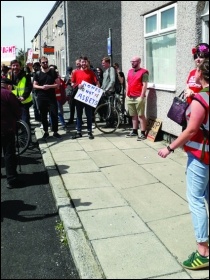 Protesting against an eviction in Liverpool’s Kensington area, 4.7.19, photo by Roger Bannister   (Click to enlarge)

Irene suffers from stomach cancer, and walks with the aid of a crutch. She is a private tenant of the Mystoria property company, which recently sent her a Section 21 eviction notice (Section 21 allows landlords to evict tenants on a 'no fault' basis).

Kensington is an inner city area, just outside the city centre, immediately beyond the area dominated by two of the city's three universities.

It's here that landlords can obtain higher rents from turning dwellings into multi-occupancy rentals for students than from single families or individuals like Irene.

Irene initially turned to a campaigning group called Acorn, who supported her at a court hearing and called a mass lobby to show support for her, and to prevent an eviction by bailiffs.

On 4 July, local residents, Acorn supporters and pensioners from the Merseyside Pensioners Association turned out in her support, protesting loudly outside Irene's house while she attended her court hearing.

After an hour or so Irene returned, and broke into tears as the protesters cheered her arrival. She told us that the eviction had been delayed for six weeks. We will build for an even bigger turnout then.

News of the delay led to an impromptu march down a neighbouring street, to the applause of residents who came out of their homes to see what was going on.

Universities, some of which are cash rich despite government austerity, should build appropriate accommodation for students, at rental prices that they can afford.

More importantly, this miserable system of capitalism, that allows property companies to behave in such an inhumane manner, should be overthrown, and replaced with a socialist society, where housing is allocated to all on the basis of need, as opposed to the current profit based system designed primarily to benefit the greed of the rich.