Link to this page: https://www.socialistparty.org.uk/articles/29351 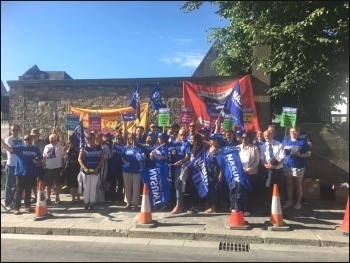 Teachers and support staff on strike at the Martin’s Gate ACE Multi Academy Trust in Plymouth, 2 July   (Click to enlarge)

Teachers and support staff at the Martin's Gate ACE Multi Academy Trust went on strike in Plymouth on 2 July. The action called by teachers' union NASUWT was in response to an increasingly hostile work environment.

NASUWT members were calling for an end to bullying by management, calling out the ineffective management of workload, calling for full union recognition with facility time and the setting up of a Joint Consultative Committee (JCC) to formulate an anti-bullying policy.

A member of staff has now confirmed that management has agreed to a trade union recognition agreement, will establish a JCC and pay into the Plymouth City Council facilities fund to enable local representatives to attend it.

Management has also agreed to produce an anti-bullying policy which makes it clear that staff will be treated with dignity.

The picket line was lively with solid support from people driving past. One striker was keen to share their thoughts: "There has been a lot of horrible behaviour from the top and a complete lack of appreciation of staff who worked incredibly hard under difficult conditions to achieve a good Ofsted report.

"We've had veiled threats with the CEO bizarrely announcing to the whole staff, 'I love you... but I'm coming for you.' We've been ground down for so long, they've been getting rid of staff summarily due to lack of funds, yet some managers are on £70,000-£90,000 and beyond."

Nigel Williams, national executive member for Devon and Cornwall NASUWT said: "Teachers [and support staff] are striking due to the deterioration in relations between staff and management.

Skilled teachers don't want to strike but have no choice. Why would the board of trustees not want to meet our reasonable demands after three months? All we want is full trade union recognition, an anti-bullying policy and the setting up of a JCC. There will be another strike next Tuesday if management don't meet [us]."

Strikers struck a defiant tone: "We expected 20 people to show up to the picket line but more than 40 have turned out with some signing up on the picket line to join the strike and students have come out in support."

Union membership has trebled since the action started and it is clear that members have been emboldened by the action and subsequent climbdown by management.

However, the only thing that can ensure management doesn't renege on its promises and guarantee that education and not profit remains the central motivation, is to do away with academies and bring them back under local education authorities, with full funding.