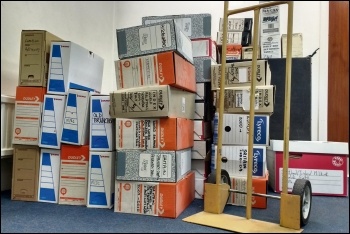 Our members and supporters have responded magnificently to our appeal following the purchase of our new premises. We will be moving shortly and are currently in the process of fitting out our new headquarters.

In addition to the purchase price of the building and all the costs associated with that, there are also the costs of moving and fitting out the new offices. For instance, installing all the cabling and power points will cost over £10,000; moving the press will cost around £4,000; the intruder alarm system £2,000.

A longstanding member in the Southern region responded to our appeal and donated £10,000 - an excellent donation which will help pay for the new data and power points currently being installed.

We also appealed for comrades to buy a brick for £20 for the new offices and Ruthie McNally from Worcester responded immediately, donating £20.

Can you help us with a donation towards our moving and refurbishing costs? In addition there are still over £25,000 in outstanding pledges - if you haven't yet redeemed yours please can you do so as soon as possible.