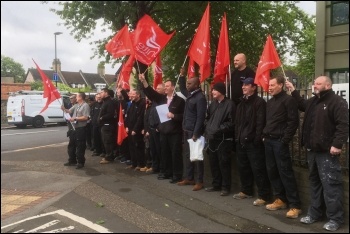 A mass meeting on 10 July agreed a vote of no confidence in local managers as well as agreeing a plan of action which included effective picketing along with a series of demonstrations. The shop stewards committee, the leadership of the campaign, were warmly applauded by the mass meeting for the role that they are playing.

The strike action is to protest against plans to implement a new pay and reward scheme that could cut pay by up to 20%, to make unauthorised deductions from pay, and in opposition to bullying, a management 'jobs for the boys' culture and serious breaches of health and safety, including exposure to asbestos.

The union has approached the lead councillor for the service, John Gray, for his assistance to resolve the dispute. This is a Labour-run council. Councillor Gray is also a senior Unison union representative in London. Unite rightly stated that in light of his union position, we would expect his support for workers taking action against pay cuts.

His response was to claim a conflict of interest and a refusal to meet with the local Unite representatives. This highlights once again how important it is for Labour Party members to deselect councillors who are not willing to stand up for the people who elected them.

The message from the mass meeting was clear. We take action and make sacrifices by striking now - to stop our pay being sacrificed tomorrow.