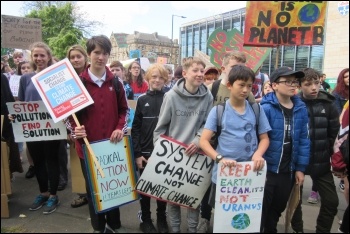 The official climate change advisers for the government have exposed the Tories as being all talk and no action. John Gummer, the Committee on Climate Change chair, compared them to characters from Dad's Army!

They state that "the government has delivered only one of 25 critical policies needed to get emissions back on track." Despite Theresa May announcing Britain would lead the world by having net-zero greenhouse gas emissions by 2050, the government is already off track to achieve its previous target of 80%. Not very impressive for a government aspiring to host a critical climate conference next year.

The Committee on Climate Change calls for more green space in parks and gardens to help cool cities and reduce flood risks. Urban green spaces have shrunk from 63% in 2001 to 55% in 2018. Hard surfaces in towns are known to make floods worse, but there has been an increase of 22% over the same period.

The Committee on Climate Change has grumbled about the issue, but with glacial melting in Antarctica potentially becoming irreversible, we have no time to risk with a profit-driven government. Mass action is needed to remove this government and force a general election.

To truly prevent climate change from killing our planet, we need public ownership - especially of the industries that cause the most pollution. To win that requires mass workers' action and a socialist alternative.

A socialist system could reduce emissions and environmental harm by removing the profit motive, massively investing in green technology and public transport, and allowing the working class to democratically plan production.

Young people and students have sparked this movement with strikes every month. Together with democratic workers' organisations, school student unions can help organise the next steps of the struggle and fight for the socialist change we need to stop climate change.