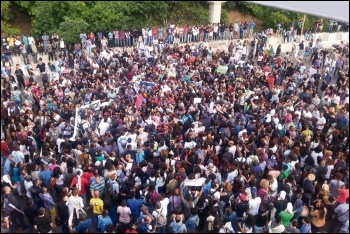 Mass protests blocked roads across Israel after the 30 June killing of 19-year-old Ethiopian-Israeli Solomon Tekah by an off-duty cop in the Kiryat Haim area of Haifa, an Israeli port town on the Mediterranean Sea. The Socialist spoke to Eli Yossef, a shop steward in the ancillary section of a hospital in central Israel.

Tension has been building up for a long time, as 15 Ethiopians, many of them children, have been killed since 2003. Nothing was done to the perpetrators.

The murder of this lad - it was horrific. He was shot in the heart, for no reason, by an off-duty policeman.

The policeman claims that his gun discharged accidently. [Solomon's family lawyer, however, says that it "was a murder, not manslaughter."]

Everyone is shocked by the speed that the protests erupted. Within hours, demonstrators were block- ing roads everywhere and the whole country was shut down.

This shows what power the working class has if it is prepared to fight. If this kind of struggle had been organised a few years ago, we could have prevented the privatisation of the country's gas reserves.

At the moment, the struggle does not have clear demands. They want an improvement in the attitude of the state to their community.

In 2015, 40% of the inmates of the main youth detention prison were Ethiopians. But Ethiopians are barely 1.5% of the population.

The Ethiopians do the worst jobs, with the worst conditions. They face racist oppression from the state.

Last week a 17-year-old lad was shot by the police here in Ramla. Not an Ethiopian, but he belonged to the same class. The state uses brutal police repression against the most exploited layers of the working class. Unfortunately, sections of the working class have allowed the ruling class to play the game of 'divide and rule'. At the moment there is a lack of a leadership which can unite the working class.

Inbal Hermoni, leader of the social workers' union, has a good position of supporting the Ethiopian protests. But the Histadruth [trade union federation] should be step- ping in. It should be supporting the protests - not just in words, but also in action.

The capitalists seem strong at the moment. But their system is a gi- ant with clay feet. When we have a fighting leadership which unites the working class, then the ruling class will have a bigger problem.