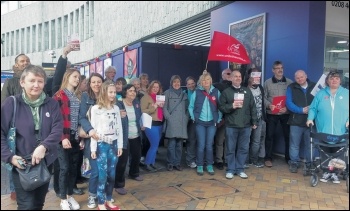 The long-running strike at Bromley libraries has not lost its enthusiasm. Once again there was a large picket outside the main library.

These have been interspersed with protests outside other Greenwich Leisure Limited-run facilities such as libraries, sports centre and swimming pools.

The company is running down the service to increase profits, refusing to replace staff and increasing workloads without increased pay. But staff are angry and united against any more attacks and ready to defend the service they provide and their jobs, terms and conditions.