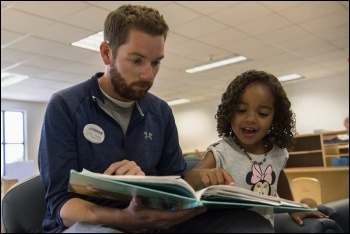 Teaching assistants are overworked and underpaid, photo by USAF/William Tracy/CC   (Click to enlarge)

A teaching assistant in Wales

Our wages do not reflect the invaluable role we play in the education and welfare of all students. Unlike teachers, TAs are not paid during school holidays.

Wages are paid pro rata with money kept back each month so there is some left during the holiday times.

We are regularly expected to deliver lessons to whole classes and then mark the books. This is a significant saving on paying for a supply teacher.

Extra hours, but no pay

The TA, however, receives no remuneration for the extra hours worked or the extra responsibility involved.

TAs are responsible for the running of interventions ensuring all students are supported to reach the required levels of literacy and numeracy.

Welsh schools inspectorate Estyn closely scrutinises the running of these interventions during its visits.

To successfully run the interventions a lot of preparation, resources and planning of lessons is required.

Much of this is done outside of paid hours and often at home as no time is allowed in a timetabled day.

As TAs often live locally we are an invaluable connection between local communities and their schools.

The role of the TA is an increasingly diverse one. We support children with emotional and behavioural difficulties and are often the ones who form positive relationships and build up trust.

TAs prepare resources, work on displays around the school, deliver interventions, cover classes, fundraise, provide first aid as well as supporting all school staff, and often doing work to help the office clerk too. The majority are also dinner ladies to support their income.

We are expected to support many extra-curricular activities. These include concerts, plays, discos, school fetes, and trips as well as residential trips.

These can add hours to the working day but are all unpaid. We often feel pressure to attend, sometimes causing difficulties with our own family arrangements.

Dedicated TAs can work as many unpaid hours as those that are paid each month, making actual wages well below legal levels.

School budgets being tight (and due to be cut further) means many schools purchase the resources that are needed themselves. It's usual to buy our own files, glue sticks, staple guns and so on.

The TAs are the first to step in and make sure that a child on a trip is not left out when in the gift shop or at the ice-cream stall. We often bring in a PE kit or a warm coat from our own homes if a child is in need.

Many TAs ourselves are parents and came into the role to support our families. The role has changed unrecognisably in the last few years, but the wages do not reflect the level of commitment and professionalism the position now demands or the extra pressures it brings.

Low paid and overworked, it is easy for TAs to feel undervalued by teachers, head teachers and the governing body. It is no wonder many leave stressed and disillusioned.

TAs have taken strike action in recent years in Derby, Durham and Barnsley showing the anger and willingness that exists to fight back.