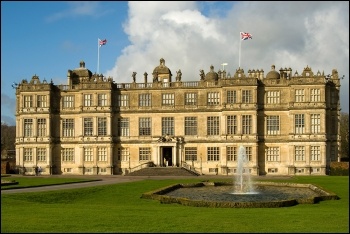 A few years ago, there was a raft of TV programmes showing aristocratic owners of stately homes who had fallen on hard times, and were in danger of losing these precious national treasurers forever.

We watched these bumbling modern-day aristocrats retreat to one room, boiling water on a single ring to make tea among the fraying carpets and dusty curtains, accompanied by the sound of rainwater dropping into steel buckets to catch it from the hole in the roof.

Matthew Bond and Julien Morton from London South Bank University have just published research into the health of the modern-day aristocracy.

The research looked at 2,000 current title holders, such as dukes, marquesses, earls, viscounts and barons. It looked at more than a million wills passed down from generation to generation, some going right back to 1858.

The research paints a totally different picture of the modern aristocracy to the one portrayed by these television programmes. It paints a picture of hermetically sealed-in wealth within families that has become bigger and more concentrated over the years.

Some of the biggest inheritances of the last decade are 6th Duke of Westminster, Gerald Grosvenor, worth £659 million. 11th Baron Barnard, Harry John Neville Vane, £94 million. 11th Duke of Grafton, Hugh Dennis Charles Fitzroy, £71 million, and the list goes on.

Between 1978 and 1987 these wills and aristocratic inheritances were worth £4.2 million each, adjusting for inflation.

The report suggests that economic 'liberalisation' and deregulation of the City, ushered in by Margaret Thatcher, turbo-charged aristocrats' wealth. They took advantage of low interest rates and bought stocks and shares.

The values of the same inheritances have now increased fourfold to £16.1 million each.

The report cites the aftermath of World War Two as a phase of more progressive taxation and the expansion of the welfare state - Labour government reforms during a period of economic boom - which resulted in a 'pause' in their parasitical accumulation.

Rather than tea and sympathy, this report will have you looking for your pitchfork, particularly when you think that the phrase 'child summer hunger' is becoming normalised.

Many kids who experience this suffering will accompany their working parents to foodbanks.

The theft of land and assets by aristocrats hundreds of years ago allows them to survive and thrive still. The first English revolution obviously didn't complete the job, another one is needed.