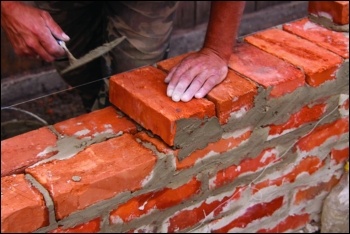 A big meeting of local residents and trade unionists in Edmonton, North London, agreed to set up a new housing campaign to fight for 100% council homes at Meridian Water, the biggest redevelopment project in London.

The meeting was called by Enfield's fighting, no-cuts councillor, Tolga Amaraz - recently suspended by the Labour Party for refusing to vote for cuts - along with other anti-austerity Corbyn-supporting Labour Party members who have organised as Enfield Labour Socialists.

Socialist Party members enthusiastically took part and will be helping to build a campaign to force this right-wing Labour council to change course.

The development is Labour's chance to end the housing crisis in Enfield instead of handing publicly owned brownfield (ex-industrial) land to private property developers and guaranteeing only 75 council homes in the first phase - and none at all in the second phase!

The initial plans for Meridian Water are to build 10,000 homes, but even if only 5,000 get built because of protections on the land, it would still be enough to solve Enfield's housing crisis.

There are over 3,400 households in Enfield in temporary accommodation, the second highest in the whole country, costing the council £8 million a year. 4,500 are on the council waiting list.

In Enfield, over £150 million is paid in housing benefit to subsidise private landlords. As Tolga said, "socialism is cheaper!"

The meeting gave a little glimpse of what could be achieved if, instead of bowing down before the Tories, Labour councillors made a stand.

One rebel councillor and some Labour members who genuinely want the party to act as the champion of working-class people, have galvanised a great start to what could be a major campaign.

Imagine the impact if Jeremy Corbyn was calling on Labour councils across the country to do the same.

A general election is looming and there could be a Jeremy Corbyn-led Labour government very soon - so what's the issue? As several speakers said, there is no reason to wait for a Labour government.

The council should make a stand now, use reserves and borrow the money, and lead a big campaign for the resources necessary from the government.

Socialist Party members pointed out that Haringey right-wing councillors were removed by the members when the left got organised to deselect them. Enfield cutters and privatisers be warned - if you're not prepared to build council houses, others are waiting in the wings who will!