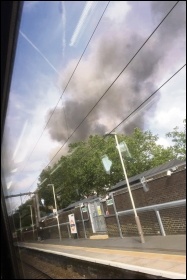 Billowing smoke from the Mall fire visible from the nearby railway station, photo by Ian Pattison   (Click to enlarge)

Nancy Taaffe, chair of Save Our Square E17

On 22 July smoke billowed across the Walthamstow skyline as news spread on local social media that the shopping mall - the Mall - in our town centre, was on fire.

Save our Square, which is the four-year-old community campaign against massive overdevelopment plans by the council in that area, and is led by Socialist Party members, immediately put a statement up on our Facebook page about the fire, along with an advert for an emergency public meeting the following Thursday.

We expressed our concern that the authorities could use the fire for a sort of 'disaster capitalism' - where phenomena like floods or fire are the excuse to rush through plans to privatise land, buildings and space.

We were determined not to let this happen to the Mall after the fire. Within three days, over 9,000 people had read the post and our campaign was announced on LBC radio as well as on London BBC breakfast news.

At our public meeting we agreed to continue to campaign for our alternative 'people's plan' which we had compiled a month before this fire, as part of our regular campaign.

Our plan is proposing good jobs, council homes and public services that are accessible to all in the square and Mall area.

We have produced a survey and we are planning to run our own consultation throughout the summer and early autumn, with the aim of seriously approaching the authorities in early 2020.

Scott Jones, the east London retail branch chair of the shop workers' union Usdaw, spoke (in a personal capacity) about the immediate demands of shop workers in the light of the fire.

He called for no loss of pay and for travel expenses to be paid for all those transferred to other stores. He also called for shop union members to be involved in any inquiry into the fire.