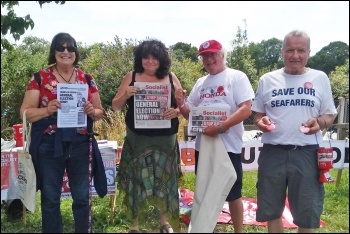 Thousands of activists and trade unionists attended the Tolpuddle festival over the weekend of 20-21 July.

The festival is held to celebrate the memory of the Tolpuddle Martyrs - agricultural workers who were arrested and transported to Australia in 1834 for forming a trade union.

Socialist Party members who attended called for an immediate general election to oust Boris Johnson and the Tory government, which was met with complete agreement by the large majority of people who stopped to talk to us.

They saw the urgent need to stop Boris in his tracks and for a Labour government with socialist policies.

However, there was an undercurrent of worry that the massive onslaught from the pro-capitalist media and from the Blairite wing of his own party might mean that Corbyn may not win the election.

For the second successive year the crowds were slightly down in number as the initial euphoria over Jeremy Corbyn as Labour's leader has declined.

Even so, members from Southern and South West regions of the Socialist Party managed to sell 111 papers and raise £185 for the fighting fund.

Jeremy Corbyn gave the final speech at Tolpuddle. He said that he wanted the next Labour government's legacy to be as great as the one in 1945.

He stated that he intended to found a national education service where education "from the cradle to the grave" is a right, not a commodity.

He made many pledges for socialist policies to end austerity, poverty and combat climate change. He promised that a Labour government would repeal the Trade Union Act.

Concluding, Corbyn gave a rallying call for the labour movement to be united on its policies because he believed a united movement can defeat the Tories and win an election.

However, that requires that he takes on the Blairite saboteurs and democratises the Labour Party.