The Socialist Party has moved! But keep those donations coming... 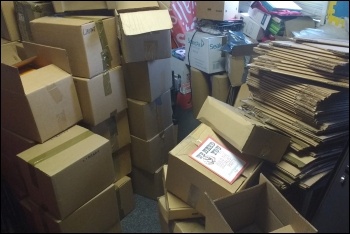 The Socialist Party has moved, photo by James Ivens   (Click to enlarge)

The Socialist Party has now moved into our new national headquarters in north London. We would like to thank all of our members and readers for the excellent donations to our building fund which have enabled us to make this important move.

But we still have many additional costs related to moving and fitting out the new offices. Can you help us?

Perhaps you could buy a brick for £20, or maybe you are able to make a bigger donation. There are also still over £25,000 in outstanding pledges, so if you haven't redeemed yours yet please can you do so as soon as possible.

The Socialist newspaper is still in its fortnightly summer schedule. This issue of the Socialist will run from Thursday 1 August to Wednesday 14 August. Our normal weekly schedule will resume on Thursday 29 August.