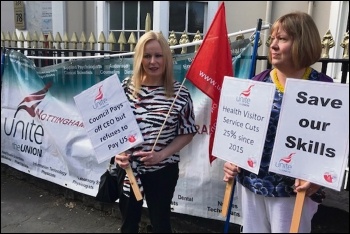 Health visitors - nurses who specialise in pre-school child development - in Lincolnshire have been on strike for 14 days against the Tory county council. This is probably the first ever health visitors' strike in Britain. 58 Unite the Union members are fighting to save the essential service they provide to young families.

In 2017 they were transferred from the NHS to the council. Although NHS and local authority workers have had (small) pay rises since, the council has frozen health visitors' pay. They have lost over £2,000 a year each.

The council is deskilling specialist experienced health visitors by introducing a split-level service. A 'junior' health visitor role no longer has specialist responsibilities like 'complex safeguarding' of children at risk because of family health and social problems.

This will put young children and families at risk - and risk the smaller number of 'seniors' burning out with stress.

Instead of preventing childhood and family problems, health visitors will be box-ticking or rushing from crisis to crisis.

The council wants the service on the cheap for future privatisation to a profit-making company. What a greedy short-term outlook the Tory council and government have! The number of health visitors nationally has fallen by 25% since 2015. These massive cuts will lead to more health and behaviour problems as children grow up.

On strike days the health visitors have marched through shopping centres across the county with placards and leaflets (except where landlords of privatised public space have barred their way!) Support for these brave and determined workers has come from local people, Unite and other union branches.

Workers have had enough of austerity and applaud those fighting back. It shouldn't be left to one small group to fight alone when workers everywhere face similar problems.

When the Trade Union Congress meets in September it should draw up a plan to bring all workers together with marches and strikes demanding an immediate general election. A Corbyn-led government could reverse the cuts, so these specialist nurses can help young families instead of fighting to save their service.