Link to this page: https://www.socialistparty.org.uk/articles/29463 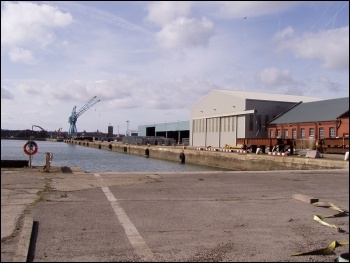 Members of the RMT union protested against Seatruck at the Port of Liverpool on Monday 19th August, adding to the protest months ago to stop the exploitation of agency and foreign workers to undercut local workers who have made collective bargaining agreements in line with the national minimum wage.

RMT national secretary Darren Procter explained: "Seatruck is a notorious employer operating on the Irish Sea, Seatruck abuses EU rules, paying migrant workers as low as £3.78 per hour with deployments of 8 weeks on, 4 weeks off.

"This is a clear lust for cheap agency/migrant labour in place of local workers who've earned better conditions. The government knows about this and are clearly sanctioning it.

"What regularly happens in these cases is that when your continuity of work ends (8 weeks on, 4 weeks off), you're basically terminating your contract and therefore less likely to achieve a pension and other benefits like holidays etc."

Darren continued: "This level of exploitation is not striking a chord but if this was happening on the high street, we would all be shocked and appalled."

Many Liverpool families come from seafaring traditions in one way or another. To see terms and conditions deteriorate over time is a clear indictment of how big business overlooks conditions of workers in favour of profit.

This version of this article was first posted on the Socialist Party website on 21 August 2019 and may vary slightly from the version subsequently printed in The Socialist.