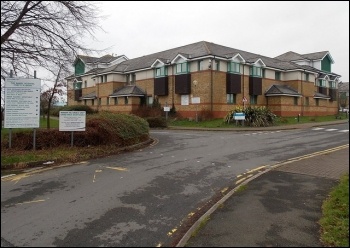 Cardiff and Vale University health board plans to close the acute rehabilitation ward as part of its latest round of cuts, which it has dressed up as a reorganisation of services for older people.

Ward East 2 in Llandough Hospital is also facing closure as part of the plans, as is Rookwood Hospital in Cardiff.

Sam Davies provides rehabilitation services for older people following a stroke, injury or illness. Patients can spend weeks or months on the ward before they are ready to return home. Ensuring services are local and accessible to families is very important.

The health board says its plans are designed to ensure patients are rehabilitated as quickly as possible and return home, but in reality are driven by the funding cuts demanded by the Westminster Tory government, which the Welsh Labour government has done nothing to oppose.

Small recent increases in Welsh NHS funding have not reversed the huge cuts carried out previously. Hospitals in Cardiff and Vale alone have lost £130 million, according to Cardiff Council.

Healthworkers' union Unison has organised two days of action in Barry and has set up a petition calling on the Welsh government to intervene to reverse the closure.

Support for the campaign has been enormous. The union reports that 5,000 signatures have been collected in just three weeks.

People would turn up to a public meeting and turn out onto the streets to support NHS staff and patients if the union organised a protest march, as they did recently when the Vale council proposed library closures. Unison could mobilise its membership across Wales to attend.

Workers would get huge sympathy, too, if they took strike action against cuts, as NHS staff in Bradford and elsewhere are doing.

People understand that endless cuts demanded by big-business politicians are permanently disrupting our NHS services and could be stopped if workers take action.